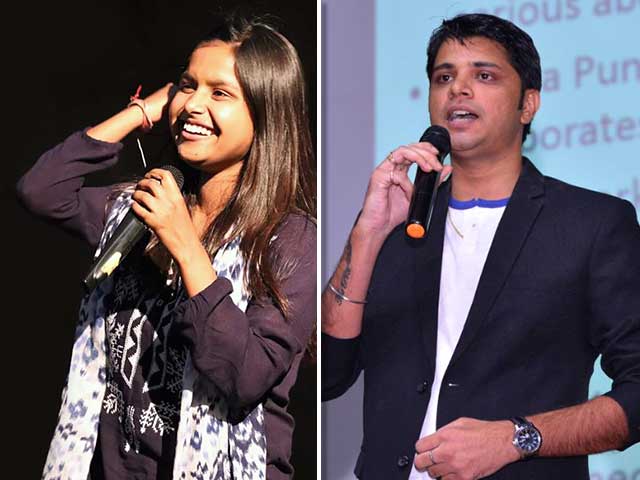 They may seem unassuming young millennials but they are wizards with special powers. Their mind is magical and their words are their wands.

They write for passion, and go online to fuel it. Poetry is no longer confined to ivory towers. The recluse poet, with a woe begone look, and a penny in his pocket is an archaic analogy. Now the poets use OpenMics, Youtube and other digital platforms to get feedback from peers and recognition from a wider community.

Vaibhav Gupta, a young IT professional, moonlights as a poet. He would attend Kavi Sammelans, poet gatherings in his village of Shahpur in Madhya Pradesh. Listening to the wise and their verse in the moonlit nights till 3 in the morning, he himself took inspiration and began writing when he was 14. But at that time, there were no Open Mics. Gradually, he improved himself, sought feedback and began performing 10 years ago. Now the IITs seek him out to perform at their fests. Being an engineer himself, he gets the right nerve among the students.

Vaibhav thinks that the digital medium is a double-edged sword. While it gives exposure and audience to many young poets, he feels that the digital world has no quality checks. He says, “Not only the young and emerging, but even established poets feel the need to be recognised online. But OpenMics are meant to learn something, to better yourself. These days, people are in a hurry to be seen online. So, anyone and everyone gets themselves published digitally. This is affecting the quality of poetry. I started performing after getting feedback and peer recognition. Now, things have changed.”

Even Shweta Singh feels the same. A graduate in Biotechnology, she is the proud poetess of a poem that went viral and garnered 1.1 million views. She says, “Digital platforms are amazing. Earlier great poets would struggle their whole live, and get recognition after their death, for instance, Jaun Elia. But now, poets get instant recognition. This though comes with a bane. Now the digital world is crowded. Everybody is writing, and in the crowd, often good writers are neglected, and someone with shallow but catchy stuff goes viral.”

Another concern in the digital space for writers is plagiarism. Vaibhav Gupta is in the midst of a battle for copyright. His poem, “Mein Nari Hun”, was read out by a school girl without giving him the credit. That video went more viral than the original, and unintentionally, the poem got attributed to the girl, instead of the writer. He said, “This happens because online, people watch a video and share it, without giving the due credit to the poet. Not only should the copyright laws be made more relevant and stringent, but also, people need to be more aware and appreciative of the original works.”

Both the poets have found an audience at Nojoto, a community for creative endeavours. Vaibhav says “If anyone wants to write, they should recognise that they need to read more and listen more, before they can produce something of their own. Also, they should not be in a hurry to be published. It is better to wait and put out the best work, than ruin your chances with mediocrity.” Shweta Singh says, “Every aspiring poet must keep writing. Some write for fame, and some write for their own passion. But it is the latter who create the most beautiful work. So, you must write for yourself, and keep doing that.”

While Shweta is still a student, wondering at her chances of becoming a professional poet, Vaibhav has been performing for the last ten years. He continues his job in IT services, because he feels that one cannot force poetry, and neither is the scope great enough to earn you a proper living. He says, “One cannot take the pen to paper on a deadline. I write when the words come to me naturally. Also, I have begun stand-up comedy, because while poetry earns you respect, it does not earn you money.”

Vaibhav and Shweta are the ambassadors of modern poetry. They embrace the digital age, but fight the woes that come with it. They also synthesise their philosophy for poetry with the practical calls of life.