HotFridayTalks
Home Work “Working With Ajay Devgn Has Been The Most Humbling Experience For Me”-... 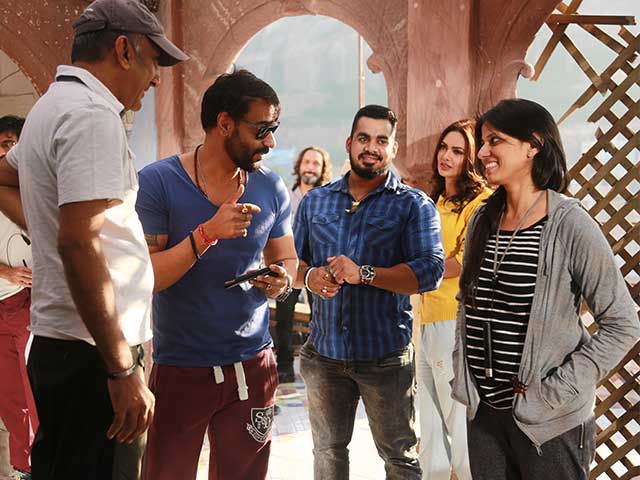 Coming from a small town in Patna, and that too from a conservative family who had no connection with films whatsoever, cinematographer, Sunita Radia, had never in her wildest dreams thought she would be a part of an ensemble film some day. But like they say miracles happen and hard work pays off, that’s exactly what happened for her. From an idea that was born over some wine and dinner with friends, to actually assisting Binod Pradhan, one of the top cinematographers in the Indian film Industry, to independently working on a multi-starrer film like Baadshaho, Sunita is living a dream at the moment. Catching up with her after many years and discussing about all that has been going on in our lives, and things we’ve missed because of busy work schedules, we get down to discuss about her big break Baadshaho.

An excited Sunita says, “I feel like I am dreaming all of it!” and goes on to tell us HFT about her experience with team Baadshaho:

After assisting Binod for a couple of projects, Sunita ventured out on her own as an independent cinematographer. After doing some small projects, she got Jal and that brought her instant recognition internationally. “That was a big thing for me. But even after that I had to do some small budget Punjabi films for about 3-4 years, there was not much to do and I almost gave up as things were not happening,” says Sunita. Then she decided enough was enough so she decided to try and get in touch with some people on her phone list and as luck would have it, Milan Luthria happened to be one of them.”I spoke to him and that was it, there was no news from his side, till one day I suddenly got a call from Milan’s office. There was some problem with the cinematographer he was supposed to work with for Baadshaho” adds Sunita.

She met him and they discussed the project. He told her that since he would be giving her a commercial break; the money would be comparatively less as it was a huge risk he was taking by hiring someone relatively new, for an ensemble film like Baadshaho. Another condition that he put was that she would have to dedicate her time only to Baadshaho. “He said that he was taking a risk by appointing me as the cinematographer because he trusted his instincts,” says Sunita. She says she readily agreed to whatever he said as he trusted her with such a big project and she was thankful for that.

First Day On Shoot Of Baadshao With Sunny Leone

The first schedule that took place in Mumbai was a massive one and that was kind of a test for Sunita. Her very first day of shoot started on the sets of the song Piya More, with Sunny Leone and Emraan. “Sunny Leone is great to work with, she is extremely sweet and friendly. I was very nervous that day as it was my first day and I had this tension on the back of my mind about the huge risk that was on my shoulders. But all went well and smoothly and at the end of the day, after pack up, they were all very happy with my work and only then I was able to relax a bit,” adds Sunita.

On Working With Ajay Devgn

Sunita admits that working with a star like Ajay Devgn has been the most humbling experience for her. Baadshaho being an action packed film, Sunita had some challenging angles to shoot from but like she says that was nothing compared to the amount of hard work the actors sometimes put in to their work. She was especially all praises for Ajay Devgn. “It was such a learning experience to see Ajay Devgn do the entire stunt himself, there was this scene where he has to go under an armoured truck and lock its wheels, he did the entire stunt without complaining, in the burning tarmac as it was peak summer in Rajasthan. I could see the pain and difficulty he went through, but he made no fuss of it at all He is very sincere as an actor, and very honest,” says Sunita. Before starting the shoot of the film, Ajay even called for a meeting with all of the HODs of each department, he encouraged them and shared his own experiences as he is technically very sound.

Sunita tells us that he was also very supportive throughout the shoot and would give his inputs whenever asked. “He is also fun to work with and is mischievous like a child. He would often tell the crew stories about ghosts and there was this one time during Mahashivratri, he got sweets for the entire unit and these were no ordinary sweets, they had bhaaang in them. The associate director got so high and had the whole unit in splits. It was great fun” laughs Sunita.

On Working With Emraan Hashmi

Sunita shares that enough though all of them hung out together, when it came to work, Emraan Hashmi is a thorough professional. He would always reach on time on the sets, very unlike the flamboyant character he plays in Baadshaho. According to Sunita all the other actors too were very disciplined and it’s because of that they were able to wrap up the film in just 67 days, in spite of having so many actors in the film, all the production issues etc. “There was a time when Ajay’s mom was unwell in the midst of the shoot but he was so dedicated and disciplined he managed to shoot too. It’s been a great learning experience for me besides cinematography too about being professional and dedicated to your work,” adds Sunita.

On Shooting An Action Packed Film

Sunita feels that action packed films are easier for technicians to shoot because it is the action team and the actors who do most of the work. The action team also has a huge responsibility making sure all those involved are well protected while shooting the difficult actions, they take all the necessary precautions. “I have shot from the roof of a moving truck too and it was fun. I was confident because the action team made sure I was well protected. It is the actors or the stunt people who put all the hard work during the action scenes” she adds.

On Choosing A Profession That Is Male Dominated

Sunita feels that it’s a wrong notion that women cannot take all the stress and the hard work that is required as a camera person, she feels that women are always stronger, thanks to all the challenges they face every day, and also all the multi tasking they do, managing home and kids and work. Sunita tells us; ”We are well prepared to face any challenge, any task no matter how difficult. Luckily for me my team, my assistants are a good group but the point is if you know your job, everyone respects you and it really doesn’t matter if you are a man or a woman. I am lucky to have a family that supports me and are proud of what I do. So we work as a team at home too.”

Cinematography As A Profession

According to Sunita, cinematography is a beautiful profession, provided one is ready for some hard work. She feels if you pursue what you dream and work hard to achieve it, nothing is impossible. “I would like to add that everyone has their strengths, for some the work that they do is their strength, some have very good PR skills etc. For me I would say it’s my work but if you have both the skills then it’s a bonus!” she adds.

She says that now she finally has something worth showing on her portfolio with which she can approach the directors she wants to work with. She adds, “There was just one thing that my mentor, ace cinematographer, Binod Pradhan always advised me; that is to be honest and give your best. That is what I have tried to do, I have dedicated 2 years to Baadshaho and now I am excited, nervous and curious to know what people have to say about my work. At this moment I can’t decide whether I should hide somewhere like in the theatres and watch the reaction of the people or whether I should just forget everything and leave it to god and go out of the city for a vacation!”

See How Shyamoli Sanghi Balances Studies And A Career!