HotFridayTalks
Home Work See How A Runaway Kid And A Well-To-Do Kid Made It To... 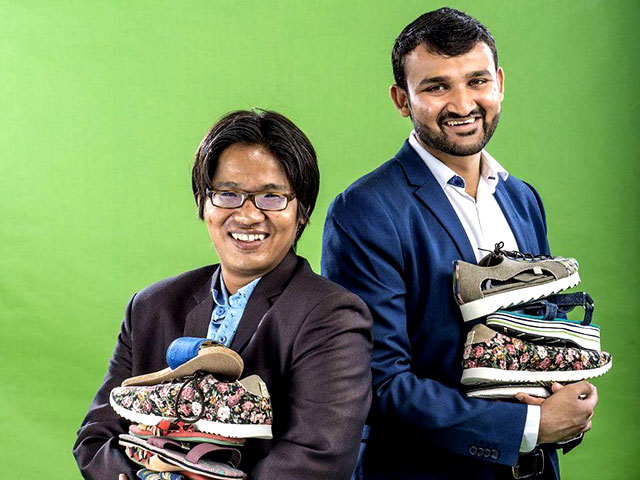 I first found out about Greensole at this year’s Kala Ghoda festival in Mumbai. While I wanted to buy a few pairs, they were all sold out (!), but my curiosity led me to find out a little more about these people who were so cheerfully selling these beautiful shoes that were made out of (can you believe this?!) the soles of discarded shoes!

This year, Greensole featured in the Forbes’ Under 30 Asia list.

The story behind Greensole is truly inspiring and you’ll soon see why.

The two founders, Ramesh Dhami and Shriyans Bhandari, come from very contrasting backgrounds and met only because a love of running united them both.

In a tale that could inspire a movie, Ramesh had run away from his home in the mountains of Kumaon, in Garhwal, at the age of 12 and had come to Mumbai. On the other spectrum was Shriyans Bhandari, who comes from a well-to-do family in Udaipur, Rajasthan.

As fate would have it, both share a love for running, and met at Mumbai’s Priyadarshini Park while training.

Ramesh had bought an expensive pair of imported running shoes with his savings, but it got torn in four months. He tried to refurbish the top of the shoe with his old T shirt, but it didn’t last long.

He then converted it into a chappal by retaining the soles, and surprisingly, it worked!

That’s when he realised that old shoes can be refurbished into a new pair of sandals or chappals.

Bringing It All Together And Starting Something Of Their Own

Both Ramesh and Shriyans had no experience in manufacturing or any idea of how to become entrepreneurs. It was just an accident that made them think of something they could actually do. But by the age of 20, they were already running a factory in which they were churning out 100 units a day.

When you are planning something of your own, it is important to understand your goal at the end of it all. At Greensole, the founders had a vision to see every foot in footwear. However, it is also important to plan out things in such a way that you are able to survive costs.

The old soles are upcycled into beautiful and very affordable footwear. This is also a great way to reduce the garbage pile-up at the landfills and reuse something that would otherwise be thrown away as waste.

For this, the founders have a retail range that they sell online and through various channels. They have also collaborated with the CSR initiatives of some of the biggest names in the corporate world, such as Adidas, Skechers, Axis Bank, ONGC, JLL, Indiabulls, Justdial, Rolls-Royce and more.

Till date, Greensole has donated about 80,000 pairs of recycled footwear to kids in need.

If You Are Planning To Start Something Of Your Own, Keep This In Mind

According to Rocky Hatiskar, COO of Greensole, “Think from a broader perspective, hunt down the flaws, learn to overcome them and proceed. No business is tough if you are ready to face the worst.”

How Much Socialising At Work Is Good For You?