HotFridayTalks
Home Culture Why Should Oxford Be Sorry For Wanting To Keep Its Campus Clean? 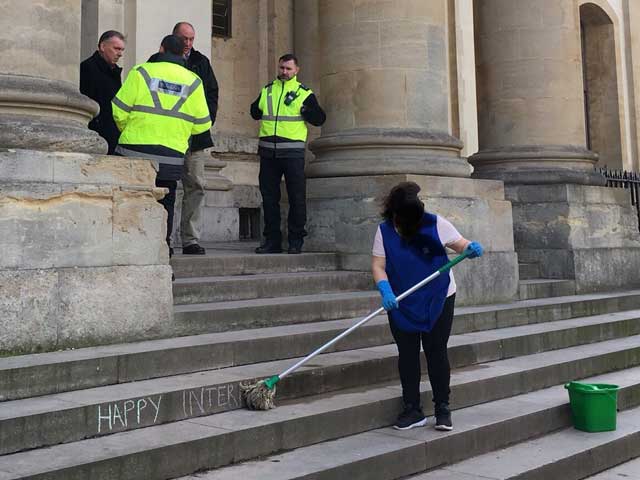 The Mecca of knowledge, Oxford University, became the centre of much criticism after it unwittingly ordered a woman to erase the graffiti of Happy Women’s Day off a staircase. The woman can clearly be seen working under the supervision of men.

Professor Sophie Smith tweeted the photo of the incident at the university’s Clarendon building, sparking an angry backlash on International Women’s Day 2018. Many have criticised it and pointed out the irony where a woman is being made to scrub the message for women empowerment.

But one wonders are the critics over reacting? What’s wrong in a prestigious university wanting to keep its campus clean? After all women empowerment is not dependent on a graffiti.

The University though humbly apologised for hurting sentiments.

We are deeply sorry for this and for offence caused. International Women’s Day is hugely important to Oxford. This should not have happened.

The Clarendon Building dates back to the early 18th Century and is next to Oxford University’s iconic Bodleian Library. If the graffiti had been about some other subject, probably we would have marked it as vandalism. Who is to decide what is legitimate and illegitimate vandalism?

To call out symbolism in this action is make a mountain out of a mole hill. Here in India, we ignore the tricolour flags littered on street like waste the day after Independence and Republic Day celebrations. The same happens with mementos on Women’s Day.

Would the twitterati have reacted the same if the lady were doing her usual job? Is it just because of a token graffiti? It is probably because of such shallow tributes, that real empowerment is being held at bay.

International Women’s Day needs to be acknowledged in a deeper and meaningful way to bring a real positive change in the status of women. War over a graffiti will hardly help the cause.