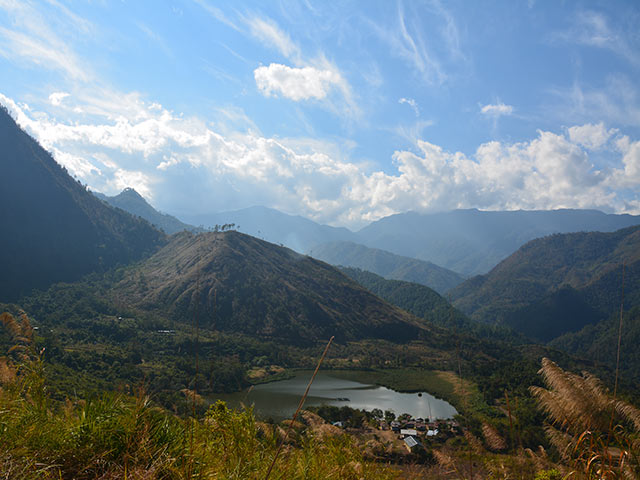 The actual name of the lake is Lütsam meaning ‘a place where water is collected’. But it has been given the name Shilloi by the British, and thence, it is known by that name. It is situated in Lütsam village of Phokhungri area in Phek district of Nagaland.

An obscure village, deep pine forests, and a mystery lake with abundance of legends. Very few know of this enchanting place in the north east of India. When you climb to the nearby peak through the surrounding forest, the lake looks like a giant human feet on earth’s surface.

There are certain legends associated with this lake, including the story about the Queen of the lake from Lünadvü village. Many years ago, a baby girl from the village was taken into the lake while the parents were working in the field near the lake. The intensive search of the missing baby went in vain till they heard a baby cry in the middle of the lake. When they looked towards the lake they saw two hands came up with a baby and it was taken down into the water again. It is believed that she is the reigning queen of the lake and therefore no one has drowned or died in this lake.

Another legend, typical of such stories in the tribal north east, says that the spirits living in the lake used to bring up from the water different kinds of weapons. It is also said that such amazing episodes were stopped only when a British army officer swam in to the centre of the lake with a written note and dropped it into the water.

This legend only adds a surreal charm to this natural lake tucked in the Patkai range of Eastern Himalayas. The elusive and endangered Siberian stop here on their way back on the migratory route. Shilloi is also a great destination for wildlife lovers and photographers as it affords an opportunity to sight endemic species like Holoock Gibbon, Sloth Bear, Spotted Linsang, Tiger Civet, Blythe’s Tragopan, Mrs. Hume’s Bar Tailed Pheasant, among others.

Trekkers can also hike through Zunheboto-Kiphere road which is a nice stretch into the Naga Hills.

The lake now has different facilities like that of guest houses. The freshwater fishes and other fresh catch make up a delightful meal for foodies.

The nearest air head is at Dimapur, which is well connected by flights with Kolkata and Guwahati. From Dimapur one can easily hire a cab till Shilloi Lake or take a bus till Kohima and take a connecting bus for Phek district. Shilloi Lake can be visited any time of the year as the weather in the Naga Hills is pleasant at all times, except for the nights which can be chilly.

Read Also: 7 Most Beautiful Lakes To Visit In India

Samar Farooqui, The Man Who Brought Slacklining To India