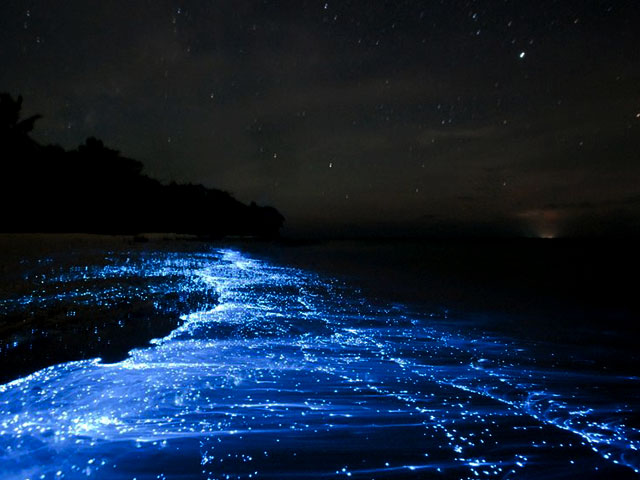 Beaches in Goa are known for all the fun and frolic. Drinking chilled beer in the cool shacks, the flea markets, the parties are a cliched image of the beaches. But did you know that at some beaches in Goa, the water sparkles with natural lights against the shore at night?

The shoreline lights up with tiny blue florescent lights. This is bioluminescence. Some tiny living creatures live in the water near the shore, and when the waves crash, they emit a natural light due to the disturbance. This turns the entire beach into an enchanting fairy land. It looks like the stars have descended into the water.

You can see this amazing sight at Majorda and Betalbatim beaches in South Goa. Both beaches have little in common with Calangute and Baga in North Goa. There are fewer eateries, almost no venues for shopping, and hence, very few people. This means cleaner beach, clearer water and calmer ambience.

Even when you walk in the water on these beaches, the lights twinkle at your feet. It is a mesmerising and novel experience, rarely seen in India.

Usually seen in the summer months, this phenomenon is also a great opportunity for photographers. Often on moonless nights, the sky takes on the colour of the lights and one can experience a small feat like the Northern lights over the Goan beach.

You can also stay at Vivenda Rebelo homestay near the beaches, which makes for another amazing experience. An old Protuguese property, the house faces the shore and each room has a unique history attached to it.

As the beaches are secluded, it is advisable to carry a hamper for the night. Though one should not miss a meal of seafood at Martin’s corner close to the beach. As much as a beer tastes good with music, it enhances the experiences under the starlit sky with the soothing sound of the waves.

Both these beaches, Majorda and Betalbatim, are in South Goa, where the nearest railway station is at Margoa.

So, plan a visit here this summer to explore something new in Goa.

Read Also: 3 Exciting Things To Do In Goa Other Than Hitting The Beach

Why Caving Is The New Thing Among The Adventure Junkies In...