HotFridayTalks
Home Travel Did You Know That The World’s Largest River Island Is Found In... 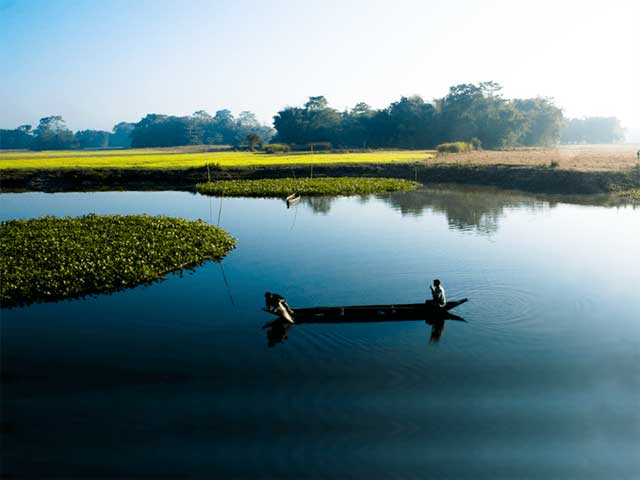 While you may be familiar with the Manas and Kaziranga National Parks, and the vast expanse of tea gardens, and the Bihu songs and festivals, do you know of a river island in the lap of Brahmaputra river in Assam?

The Majuli island is inhabited by a mix of tribals like Mishing, Deoris, SonawalKacharis and the Ahoms. The Mishing tribe, in particular, is very hospitable and friendly. A taste of their cuisine is a must for every traveller’s diary. ‘Komal Saul’, a unique type of rice is eaten by locals as a breakfast cereal while the ‘Bora Saul’ is a sticky brown rice used to make Pitha, a traditional cake.

The island has a unique culture dating back to the 15th century. A centre for neo-Vaishnavite philosophy, there are 22 Vaishnava Satras in the main cityNaghmar, the first of which was established in the 15th century by Sankaradeva, the father of Assamese culture.

Isolated from mainland, the island has been able to maintain its culture in a pristine environment. The Raas Purnima, the Pal Naam and the Bathow Pooja are some interesting cultural festivals celebrated on the island in autumn.

Masks are an important part of the Majuli heritage. Samaguri is the main mask making monastery of Majuli.

The island is also a centre for Satria art, as showcased in historical sites like Kamalabari and Garmur. Satras are monasteries constructed by saints, and known for their colourful facades and sculptures.

Apart from the cuisine and cultural fest, the island is verdant in its biodiversity. It is a birder’s paradise with many migratory birds resting here on the way back. Several birdwatching tours to beels (lakes in Assamese) are conducted by friendly locals for nature enthusiasts and bird watchers.

You can reach Majuli from Jorhat by a ferry. The closest airport is in the capital city of Guwahati. The best time to visit the island is summer or late winter, while the monsoons heavily inundate the island.

Holidays Under 10K You Must Try This Summer