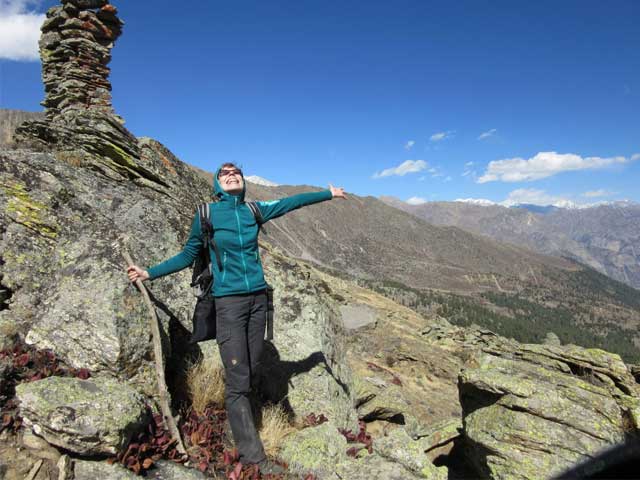 Below stands the Sutlej river, curving its way through a picturesque valley. Above stand the gigantic Kinnaur mountain range. And tucked between these two is the small hamlet of Kalpa.

Studded with idyllic wooden houses and apple orchards, Kalpa seems like a place out of a novel. Another unique aspect of this beautiful village is that the inhabitants follow a syncretic faith of Hinduism and Buddhism.

Above the village, the Shivling peaks rise above 20,000 feet. The village is nestled among pine filled forests and deodhars. The road winding down to Sutlej is bordered with chilgoza forests.

Kalpa formed a part of what was referred to as Kanaurra in the ancient times. They swore allegiance to the kingdom of Magadha which was later annexed by the Mauryans during the 6th century B.C.

You must stop at Reckong Peo for an inner line permit, before you head to this Shangrila. The view from Kalpa is beautiful with an observer getting the feeling that he is sitting in the lap of the mountains with the entire range of peaks being visible. Also visible from this place is the sacred Shivling rock on the Kailash mountain that changes its colour at different points in the day.

In the vicinity is the mesmerising Kothi temple, which makes for a delightful hike through the mountains. Dedicated to the goddess Chanadika Devi, it is set against a backdrop of mountains and groves of the deodar the temple has an unusual architectural style and fine sculpture. An exquisite gold image of goddess is enshrined in sanctum.

Another destination close by is the Chaka meadows. A short trek of 4 km from Kalpa, it offers splendid views of the Kinnaur Kailash mountain range. Kinnaur Kailash is normally dark while the Jorkanden peak is even taller and remains snowclad all the time.

Close to the village is the Lochawa La-Khang monastery. It is more than 1000 years old. While the monastery holds an old-world charm, the street outside sell some of the best thukpas in India.

You can reach Kalpa from Reckong Peo, which is 14 km away. There are direct buses to Peo from Manali and Delhi.

Read Also: Did You Know Of This Hidden Treasure In Himachal