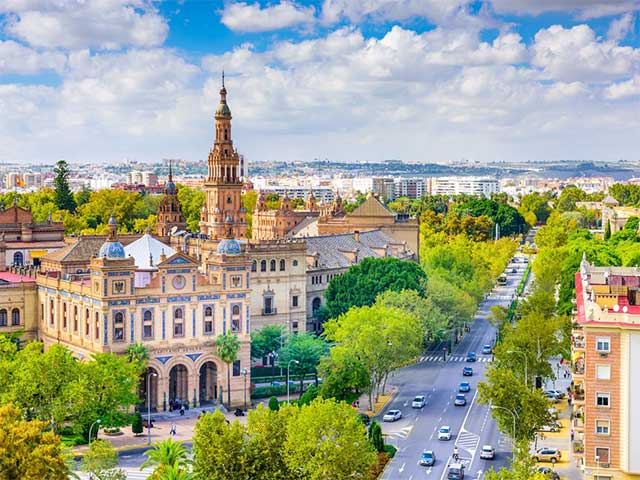 Seville is the warmest city of Europe. The average annual temperature is around 19°C. Summers are hot and dry, and winters are mild and wet in Seville. During summers, in the months of May to October, the temperatures can go up to 36°C. The birthplace of the foot-stomping flamencos, Seville is the city that adds spice to Spain. There are a hundreds of things to do and see in Seville, only if you are ready to beat the heat.

Temperatures soar the mercury level during the late morning and continue till late afternoon. Surely, you would not like to walk around the city during those hours. Plan your sightseeing around the city in a way that you can be engaged in activities indoor during the hottest hours. Go out and see the city outdoors during night. Since like all other European cities, Seville has late sunsets, you could easily go sightseeing during late hours of the day. Sunsets can be as late as 9.45 PM. For the hotter hours of the day, you could visit the churches, and museums. The high-roofed architectures will naturally keep you cool once you are inside.

Chill Off With Some Beer And Grub

While you plan sightseeing during the cooler hours of the day, spend the hotter hours in a bar or pub. You could choose to get into the modern bars of today, but I recommend you to check out some of the historic bars of Seville. El Rinconcillo, situated a little outside the city, is the oldest bar of Seville. The bar dates back to 1670! Most travel guidebooks makes it a mandatory place to check out while in Seville. Some of the other bars that have been serving people since 200-300 odd years are Casa Ricardo, Casa Morales, Alvaro Peregil La Goleta, and Bodeguita Romero. Order some beer and tapas, typically famous of Spain, and chill out indoors.

Take It To The Beach And Kill It

If you are panting and sweating in the heat of Seville, hit the beach. Seville is an inland city, but it is close to the Mediterranean Sea. There are quite a few beaches at just about 1.5 to 2 hours distance from Seville. Some of the closest beaches to Seville are Matalascañas, Huelva; Punta Umbría, Huelva; La Fontanilla, Cadiz; Bolonia, Cadiz. Get into the waters and be unaffected by the heat.

Read Also: Bollywood Movies that Give You Summer Holiday Goals

Trout Fishing And A Rare Pahadi Watch Tower, The Many Pleasures...