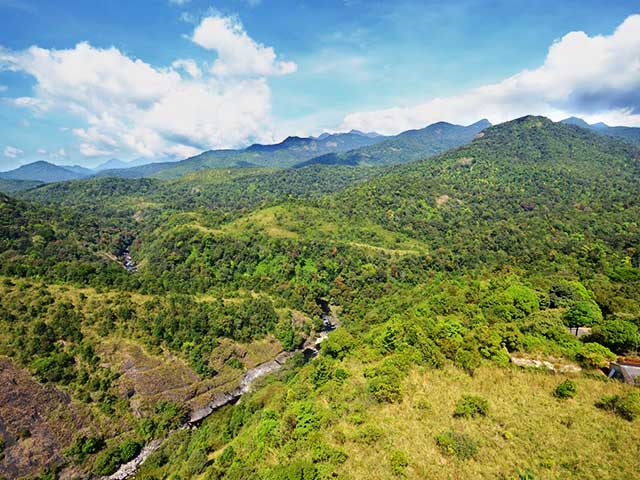 The road from Palakkad to the nearest point of Mukkali may be rough, but it leads to dense tropical forest of Silent Valley. While most forest regions are abuzz with insect sounds and the buzz of the cricket, even they go silent under its dense canopy. Hence the name to this beautiful and enchanting valley.

This forest also has actual tribals living within its precincts who are engaged in coffee and spice plantations in the buffer zone. In Hindu mythology, this forest was called the Sailendhri forest where in Mahabharata, the Pandavas & their mother Kunti, went on a forest hideout for 14 years.

Nearly 300 species of birds, and 150 species of butterflies make this a heaven for birders. You also have an opportunity to sight the elusive Lion Tailed Macaque, Giant Squirrel, Serpant Eagle apart from elephants and leopards. The dark paths, the dense canopy and the raw nature inspire an awe towards the divinity of nature.

The main reason for the extensive presence of Lion Tailed Macaques is due to the availability of its favourite food. It’s called the Vedippila in Malayalam, and is similar to Durian fruit.

You can also camp at the Kunti river for a more immersive forest experience. Little is available in way of food and accommodation outside the camp. So, it is better to carry your own sustenance.

Limited permits are allowed to enter the forest each day. The best way to sight wildlife is to arrive early at 8 a.m., and be among the first to enter the forest for the day. You can reach Palakkad is the Palghat railway station. Mukkali is also connected well by private buses.

Read Also: Did You Know Of The Enchanting Valley Of Nubra In Ladakh

Girls, Don’t Forget These Essentials On Your Next Solo Trip