HotFridayTalks
Home Travel Dare To Fly To The World’s Most Dangerous Airport? 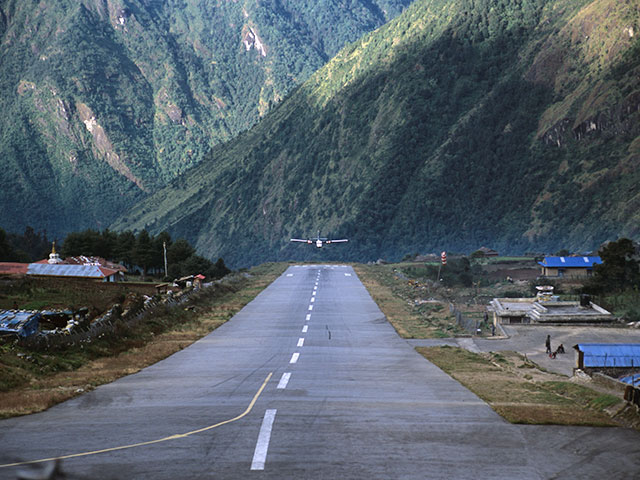 Here you will not take selfies of your airport look. You will not even try to look glamorous. This airport demands something more. It demands guts as the flight may be delayed by hours, days or weeks as the clouds clear and the runway shows through the mist.

Tenzing–Hillary Airport is a small airport in the town of Lukla. A program ‘Most Extreme Airports’, broadcast on The History Channel in 2010, rated the airport as the most dangerous airport in the world for over 20 years.

There are daily flights between Lukla and Kathmandu during daylight hours in good weather. Although the flying distance is short, high winds, cloud cover, and changing visibility often mean flights can be delayed or the airport closed. There is high terrain immediately beyond the northern end of the runway and a steeply angled 200 feet drop at the southern end of the runway.

An interesting story behind the airport is that Edmund Hillary who led the construction of the airport paid local villagers in beer for their service to dance and stomp on the runway to make it flat.

The airport is studded with a history of accident. The most recent accident in 2017 led to the death of the caption and one crew member. And yet it is an architectural marvel to build an air strip below Everest, at the height of 9, 334 feet above sea level.

The runway is only 1729 feet long against the standard 6000 to 8000 feet long runways. Despite all this, Lukla is Nepal’s busiest domestic airport and, for trekkers intent on seeing Mt. Everest, flying here is an essential part of the adventure.

This tiny town of fewer than 500 people is the most popular starting point for the Everest trekking route, whether the plan is a two-week trek to Everest Base Camp or 45-plus days to Everest’s summit.

The plane either lands properly, or drops of the cliff or bumps into a mountain wall. There are no second chances. And yet, it is an adventure that every traveller must experience atleast once.

Despite the danger, Lukla Airport should be ranked as one of the most beautiful airports in the world. Its setting among sharp Himalayan peaks, wild growth near the runway and the close proximity to raw nature makes it an unforgettable journey.

Read Also: An Uncommon Gesture At The Airport That Touched My Heart

Places To See In Portugal Before You Grow Old