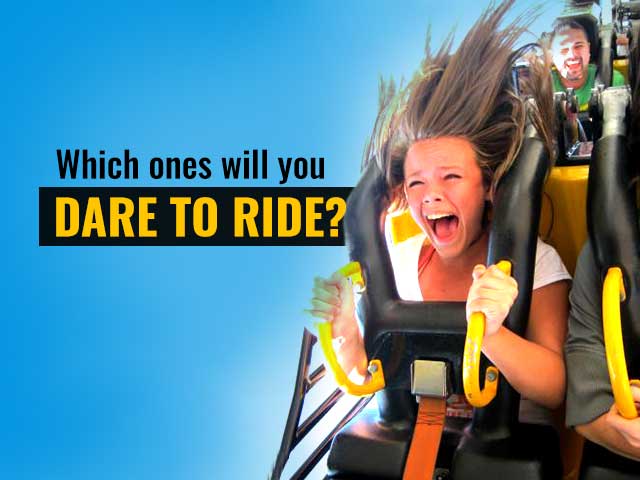 It’s 16th of August and today we celebrate ‘Roller coaster Day’. Wondering why does the world celebrate a ‘Roller coaster’ day? Well, it is believed that 16th August marks the date of the very first patent for a roller coaster ride, which was issued in 1898. Ever since, many amusement parks across the world offer special deals and discounts and celebrate the day.

1.Top Thrill dragster: Located in Ohio, United States, Top Thrill Dragster was the tallest roller coaster in the world (in 2003), which is about 400 feet in height and runs at whopping 160 km/hr speed. In 2004, four people were struck by flying debris while riding the coaster. A metal cable frayed during launch, shearing off shards of metal that struck the riders, leaving them injured. Last year, the launch cable detached from the ride leaving two people injured.

2.Intimidator 305: Located in Virginia, United States, Intimidator 305 has a steep drop. It’s so crazy that during the vertical drop the riders feel as if they’re about to fall out of the ride.

3.Full Throttle: Full Throttle is located in California. Touted to be World’s tallest vertical loop ride, this one is 160 feet (49 m) tall.

4.Sky Scream: Sky Scream doesn’t hold any record of being the tallest or the longest ride, but this roller coaster ride has crazy unexpected 360 degree twists, loops, and turns. Check it out right here:

5.Takabisha: Takabisha is located in Japan. This spine-chilling roller coaster ride is famous for having a drop angle of 121° – the steepest coaster in the world.

6.Steel Dragon 2000: Sixth fastest roller coaster ride in the world, Steel Dragon 2000 is located in Japan. This one holds a record for the longest track length – 2479 metres. A major accident had taken place in 2003, when a sheared axle caused one of the trains to lose a wheel. A rider suffered a serious back injury, but what was worse was a 28-year-old man swimming in the water park pool was injured when he was hit in the hip with the wheel.

7.Fury 325:This one is a hell of a ride! Fury 325 reaches a maximum height of 325 feet (99 m) making it the 2nd tallest and fastest Giga Coaster in the world and the 6th tallest overall. Riders reach 153 km/hr speed during the ride! Take a look:

Five Crucial Things To Remember On A Monsoon Trek