Nothing soothes the work-worn body and soul better than a spontaneous or spur-of-the-moment decision to pack your bags and escape it all. Here’s presenting a list of 5 gorgeous weekend getaways from Delhi, that you may want to keep in mind, should the travel bug take over all of a sudden.

The changing seasons are a great time to visit this beautiful town and its gorgeous rustic scene. At 166 kilometres from Delhi, Alwar is one of Rajasthan’s lesser-known gems. Often overshadowed by the touristy circuit of Jaipur-Jodhpur-Jaisalmer, Alwar is a perfect weekend getaway, providing a nice, offbeat experience. Some of the must-sees at Alwar are the Alwar Court, Moosi Maharani ki Chhatri, Gopal Sagar Lake, Bala Qila, and the gorgeous Siliserh Lake 17 kilometres from the city.

The other added attraction is the Sariska Tiger Reserve that is a must-visit, not just for the King of The Jungle, but several other species of flora, fauna and colourful birds.Famous for its scenic landscapes, Alwar in Rajasthan is also well known for Bhangarh – the most haunted place in India. The heritage city draws many tourists and travellers across the globe and is the first major city en route Delhi to Rajasthan.

You can visit the number of archaic palaces and forts, serene lakes, beautiful temple and more. There is also a newly-inaugurated space-observatory at Alwar Bagh by Aamod. In fact, this resort offers a variety of activities for travellers with varied tastes. You can try the on-location adventure course, go rock climbing in the nearby hills or trek to the adjoining village where you can even enjoy a home-cooked local meal.

The City of Taj, Agra is the place that attracts tourist around the globe. After all, who wouldn’t want to steal a glimpse of one of the Seven Wonders of the World, the Taj Mahal! Agra proudly forms the Golden Triangle Circuit of India, which consists of three cities – Agra, Delhi, and Jaipur.

The dazzling city of Agra needs no introduction. It has, for ages, been a crowd-puller and no prizes for guessing why – you’d agree. Though it is home to the marvellous Taj Mahal, the city of Agra has so much more to offer right from its heritage buildings to petha – a sweet delicacy – from Sur Sarovar Bird Sanctuary to the old temples or the serene and tranquil banks of river Yamuna, where one can simply sit and watch the reflections and changing colours of the Taj Mahal. Besides the Taj Mahal, take a 30-minute detour to visit Fatehpur Sikri and also drop by at the Agra Fort. The Bharatpur Bird Sanctuary is also a 40-minute scenic drive from Agra.

Popularly called the Dharmakshetra, meaning holy place or the land of Bhagavad Gita, Kurukshetra is a historically significant town in the state of Haryana, located around 155 km from Delhi. Drive down to this place where Lord Krishna is said to have narrated the Bhagavad Gita on the battlefield of the Kurukshetra War. There are a numerous, interesting places one can visit while in Kurukshetra including Birla Mandir, Bhishma Kund, Brahma Sarovar, Kalpana Chawla Planetarium, Sheikh Chilli’s Tomb and more.

Sohna is not even considered outside of Delhi anymore. Situated on the highway from Gurgaon to Alwar. This makes it easily accessible and popular places to visit near Delhi, especially, for corporate day outings or one-day picnics. Every year, thousands of tourists visit Sohna to enjoy hot water springs located at the ancient Shiva temple. This place is surrounded by a hilly terrain since it lies in the foothills of the Aravalis.

Hot water springs here are believed to have sulphur and other medicinal properties. It is also known to have cures for skin diseases of various kinds. These have been modernised with a sauna and spa complex and include steam baths facilities too. Sohna or Bharatpur Hill Fort is near Sohna town, the ruins of this famous fort are situated on the hilltop. It has been demolished and built again multiple times and is a perfect place to watch the sunset.

The people of Kambol were the royal elite under of Lodhi and Mughal empires who then settled around nearby areas of Sohna and built lavish houses and buildings. These Kamboj ruins are from the time when the community slowly lost its patronage as Britishers raided the area under the Jat rulers and a must-visit for history buffs who want to learn more about the heritage and traditions. Known for boating and picturesque surroundings, Damdama lake is fed mainly by monsoon rains pouring into a trough at the base of Aravali hills. The water level in this lake is of 20 feet depth. During monsoons, the same goes up to 50 feet.

Also referred to as “Brajbhoomi’, Mathura (183 kms from Delhi) is the birthplace of Lord Krishna and is situated on the banks of river Yamuna. Out of total 25 ghats, Vishram Ghat is considered as the holiest one. Mathura is a pilgrim centre, rich in mythological stories and perfect for weekend getaways from Delhi.

The Krishna Janma Bhoomi Mandir, considered the birthplace of Lord Krishna, is frequented by thousands of tourists each year. The best time to be here is during the festival of Janmashtami and Holi. This temple is of great historical importance as it is believed to be the birthplace of Hindu Lord Krishna. The Kusum Sarovar is a 450 feet long and 60 feet deep reservoir located near Radha Kunj. It is believed that Krishna’s consort Radha met him for the first time near this tank. The major attraction of this place is the evening Aarti which is soul-stirring.

Do sample the street food when in Mathura – the chaat, poori-bhaaji and of course, the pedas!

It is natural that what is familiar is often considered insignificant. Perhaps this is why these familiar, but also ignored destinations do not feature in many lists when compiling weekend getaways from Delhi. 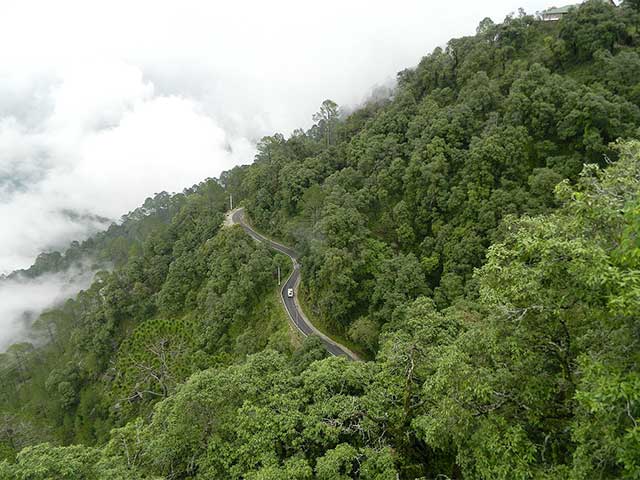 5 Reasons Why You Must Visit Lansdowne This Summer