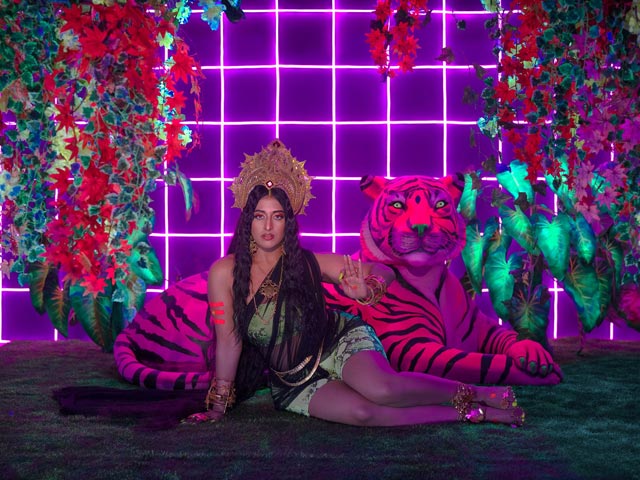 Raja Kumari’s song ‘Karma,’ which was released back in February, has been given the music video treatment now. The particularly flashy video is filled with face paints, neon makeup and striking imagery. Made entirely by an all-female team, this music video is “a reminder that beautiful things come to life when strong women put their skills together,” according to Raja Kumari.

She also added, “The video was done by an all-female team. It started as a collaboration between myself and Sam Madhu, which explores transitions from art to reality and remixes cultural elements from the past and the future. It is inspired by traditional Indian aesthetics and futuristic cyberpunk worlds.”

Kumari has revealed that Sam Madhu developed the idea of a neon universe that’s inhabited by elements usually associated with India, like demon masks, goddesses and tigers. “So you’ll see a latex matrix-inspired Rakshasi, a neon devi with her shocking pink tiger, a futuristic laser goddess. The video was so fun to make, and I feel like it represents a real female-empowerment moment,” Raja Kumari said.

‘Karma’ is part of Kumari’s second EP, titled Bloodline. Equipped with a fierce beat produced by Sean Garrett, it’s a hard-hitting track with spirited vocals. “Careful what you say, karma like a bitch,” she warns in this track. The first song from Bloodline to be released was ‘Shook,’ while it has been followed by other tracks like ‘Robin Hood,’ ‘Still Care’ and ‘Born Hustla,’ which features Janine the Machine.

Raja Kumari is currently engaged in judging MTV’s rap reality show, MTV Hustle, where she’s joined by Raftaar and Nucleya. The show is in search of India’s next rap talents.

‘Pal’ From Jalebi – Arijit And Shreya Weaves Romance Yet Again