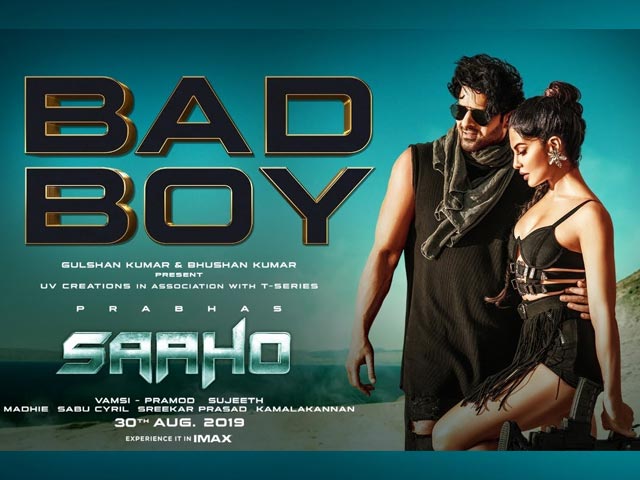 The third song from Sahoo’s soundtrack has been released in the form of ‘Bad Boy.’ The video of this Badshah track features Prabhas and Jacqueline Fernandez, and is live now on the T-Series YouTube channel. The song has seemingly been shot as a promotional single, as Jacqueline does not form part of the film’s main cast. The launch of ‘Bad Boy’ was announced at a grand pre-release event of Saaho that was held yesterday at Ramoji Film City.

The song has been composed like your regular everyday Bollywood party track. It has a musical hook scattered across its duration, and features generic Badshah rap portions in the middle. Neeti Mohan gets a small verse as well. But there’s nothing the composer has done that breaks the cliché nature of the song. And that’s not surprising since Badshah himself has composed it.

The video too refuses to stop espousing tried and tested Bollywood tropes. You have swimming pools with lots of women partying around it, our traditional macho man arriving on an army tank, cars being crushed for no reason, and of course, a more than healthy amount of objectifying of the female body.

This is the first time that Prabhas and Jacqueline are being seen together in a film. About her experience with working with him, she said, “Prabhas works relentlessly till he gets things right. It was crazy and fun. Though there is action around the song and I love throwing in kicks and punches, I’m not part of any action sequences here. I was just very nervous as to how we’d do this because I had to get my Telugu lines right. I couldn’t do it without being fully ready, but I was pleasantly surprised that I could nail my lines in the first take.”

Saaho is a multi-lingual action thriller starring Prabhas and Shraddha Kapoor, which has been produced on a massive budget of more than Rs 350 crores. The much-delayed film is now set to be released in Indian cinemas on August 30.

Taiyaari Song From Why Cheat India Is The Give Me Some...