HotFridayTalks
Home Music Theher Ja From October Is A Soulful And Romantic Song That Will... 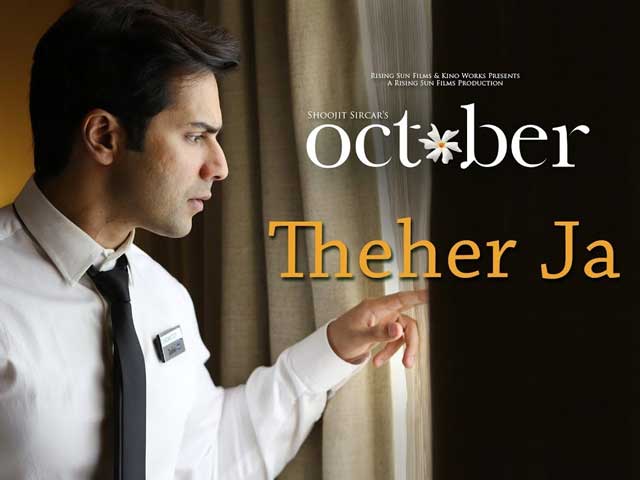 Just yesterday, we wrote about the immensely soulful track that is the October theme music. And now, the film has just had its second song released in the form of Theher Jaa which happens to be a romantic number highlighting the unspoken chemistry between the two lead characters of the film, played by Varun Dhawan and Banita Sandhu.

While the film’s theme music has been composed by Shantanu Moitra, this second song has been helmed by Abhishek Arora. The singing duties have been handled by Armaan Malik, whereas the lyrics have been penned by Abhiruchi Chand.

‘Theher jaa, tu kisi bahane se’ is the line that really reels you in the first time you listen to the song. As portrayed by the visuals, the song talks about the unspoken bond that’s developing between the lead pair. The lyrics try to convey this with lines line, “Khwaab kuch hain dil mein mere manmaane se. Kaash aisa ho, aaye tu mere bulane se.”

These lyrics create the right mood without steering the focus away from the feeling they are trying to generate. The music does full justice to them moreover. The song has a pacy yet mellow tone, the uniqueness of which is enhanced by the brilliant singing performance given by Armaan Malik.

After the trailer, which was much appreciated, the music video has given us some more visuals from the upcoming film. Written by Juhi Chaturvedi and directed by Shoojit Sircar, October tells the story of a unique relationship that develops between two hotel stewards following an unexpected incident.

What makes us very excited for this film is the consistent record of dishing out spectacular movie experiences, held by the writer-director duo. Their first film together was Vicky Donor which starred Ayushmann Khurrana, Yami Gautam and Annu Kapoor. The pair worked on Madras Café as well, but Juhi was just in charge of dialogues of the film. And then came Piku, the joyride that made us fall in love with its three lead characters.

October will be hitting theatres across India on April 13, so let’s see what the writer-director duo have cooked up for us this time around.

Mungda From Total Dhamaal – Sonakshi Stuns With Her Toned Body...