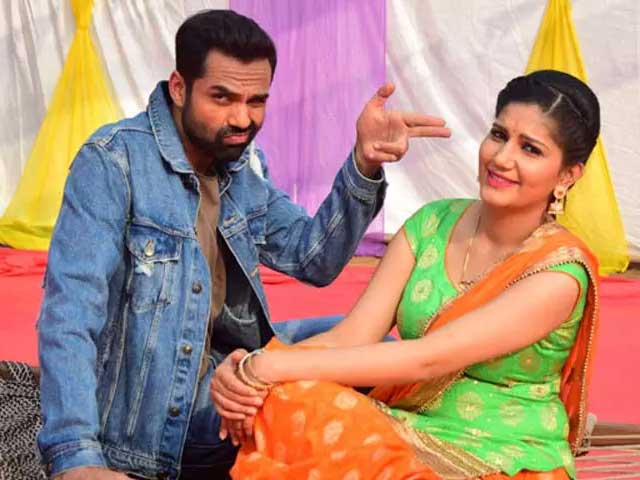 Tere Thumke Sapna Choudhary tries hard to become a new Punjabi style dance song, but doesn’t quite make the cut. The song has fast beats, a chorus, but somehow it doesn’t click too well. It does revolve around the central concept of a thumka, which makes it catchy at the first go, but loses steam soon afterwards. The song is from the movie Nanu ki Jaanu, which is slated to be a horror comedy, in which a ghost falls for a crook. While the movie might prove to be a fun watch, the song is like a punjabi dance number.

The music is by Gunwant Sen, and the song has been sung by Gunwant Sen, Khushboo Jain & Saumya Upadhyay. It has the typical Punjabi dance feel to it. It has the characteristic chorus with some dhol beats. Its loud, fast and just what a dance track needs. The beats, however, aren’t the kind which would make you want to hit the dance floor soon.

Didn’t see this coming.. did you? Throughly enjoyed my item number with @ISapnachoudhary https://t.co/EM0otQxsIa #ThumkeSapnaChoudhary

The video has, Abhay Deol and the Bigg Boss famed Sapna Choudhary dancing. Abhay Deol really has put in his best to dance, given that his reputation in this field isn’t too great. He has tried hard, but Punjabi numbers demand a lot of energy and action and bold moves. The dancing is mild and monotonous, which is not how a Punjabi song is like generally. It’s meant to be vigorous, fast and very energetic.

The song is sung decently. It’s like any other fast Punjabi song, nothing surprising, different or very catchy, however, it has a certain fun element to it.

In an industry where too many Punjabi dance numbers are composed every month, we are not sure whether Tere thumke Sapna Choudhary will make a mark to remember. However, featuring Sapna Choudhary is an added bonus and maybe the fun element in it has garnered it 2 million views on YouTube within 2 days of its release.

T-Series MixTape Season 2 Is Just Great, If Not Better Than...