HotFridayTalks
Home Music “Tareefan” From Veere Di Wedding Is A Groovy Party Anthem With A... 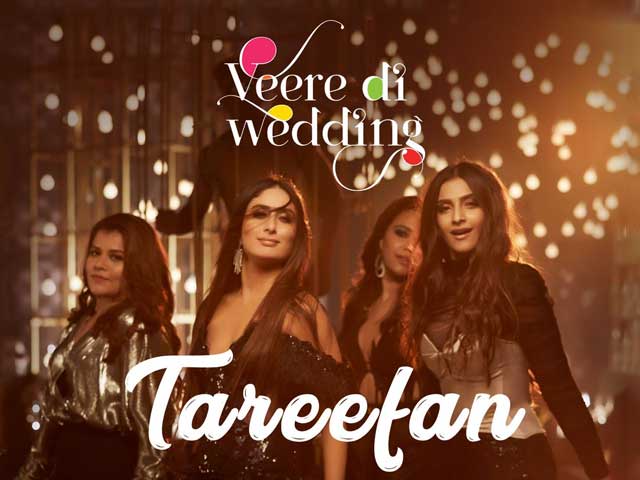 Shashanka Ghosh’s “Veere Di Wedding” is one of the most anticipated movies right now, thanks to its female lead characters who break the conventions and live life on their own terms and conditions. The audience has great expectations from the fun and quirky movie for many reasons as it is Kareena’s first movie after motherhood and it is a women-centric movie with four female protagonists. The makers of the movie have released its first song “Tareefan” that has been gaining a lot of attention already.

Back to the basics, the song is sung by the King of Rap, Badshah, and the cool and classy music has composed by Qaran Mehta. The composition of the lyrics is the joint effort of Badshah, Rupin Pahwa and Qaran Mehta. Farah Khan has choreographed the steps of the song, adding to the sexy feel of the video.

The music video begins in a sleek and stylized club and stars the leading ladies of the movie Kareena Kapoor, Sonam Kapoor, Shikha Talsania and Swara Bhaskar lip-syncing in separate frames. If one observes carefully, the song is actually a take on the inverted roles of men and women in the world. The male character is the eye candy typically played by women, thus breaking the stereotypes at one go. Meanwhile, the leading ladies don’t pay attention to them at all and focus on having a good time in stunning outfits and bold makeup signifying independence.

The peppy lyrics of the song,

-point out at a woman’s ‘conventionally needy and inquisitive’ character that has now been transferred to the guys. The chorus, “Ho dass kinni tareefan chahida ae tainu” is a pun on how women are commonly believed to be easily flattered, which is not the case with the divas in the video.

The frame where Sonam Kapoor hands over her credit card to the bartender, attracting the men beside her is a complete capsize on how a woman can be financially and emotionally independent on her own. The next frame shows Swara ass-smacking a guy and another guy pouting while being pulled in by the girls for a selfie, both of which play a satirical element. The last frame shows the ladies in a kick-and-punch fight that is quickly resolved with a hug and them driving away in a shiny new car.

The music video is already popular with a million views and counting, within 24 hours of its release and is predicted to be a great hit in all nightclubs, parties and weddings.

Read Also: Wanna Know What An Orgasm Is Called In Hindi? Watch The Trailer Of Veere Di Wedding

This Song From Baazaar Brings Bilal Saeed and Neha Kakkar Together