HotFridayTalks
Home Music Tab Bhi Tu Song From October Will Touch Your Heart With Its... 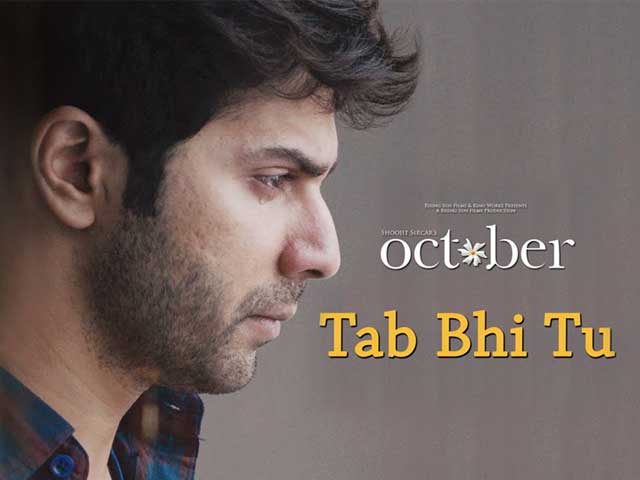 Tab Bhi Tu is the name of the latest song that has been released from the upcoming film October. It has been sung by none other than Rahat Fateh Ali Khan, and features lyrics from Tanveer Ghazi that will deal your emotions a serious blow.

Tab Bhi Tu is firstly a brilliantly composed song, and the credit goes to composer Anupam Roy for that. He has mostly been active in the Bengali film industry till date, but has also composed the music for Anushka Sharma’s recent horror venture, Pari.

The ghazal-like feel that Tab Bhi Tu has ends up being its main appeal. The voice of Rahat saab is quick to reel you into the track. It slithers from highs to lows in a jiffy, and manages to effortlessly convey the deep reverence which is at the centre of the song’s idea.

Among all the songs that have been released from the film October till now, Tab Bhi Tu is the one that actually embodies the film’s story the most. As can be gathered from the movie’s trailer, October is about a friend who becomes terminally ill, and makes the protagonist understand the value of love.

If that doesn’t get you excited for the film, I don’t know what will. The writer-director pair of Juhi Chaturvedi and Shoojit Sircar has done three films together, and all their films have had unique themes that have left us in awe of them, which is why there is so much excitement surrounding this flick.

October stars Varun Dhawan and debutant Banita Sandhu in lead roles. Its music is being composed by various composers, with Anupam Roy being one of them. Shantanu Moitra and Abhishek Arora have also composed for the film.

October will be hitting theatres on April 13.

Read Also: Theher Ja From October Is A Soulful And Romantic Song That Will Leave You Charmed

Here’s More To Add To Your Monsoon Playlist