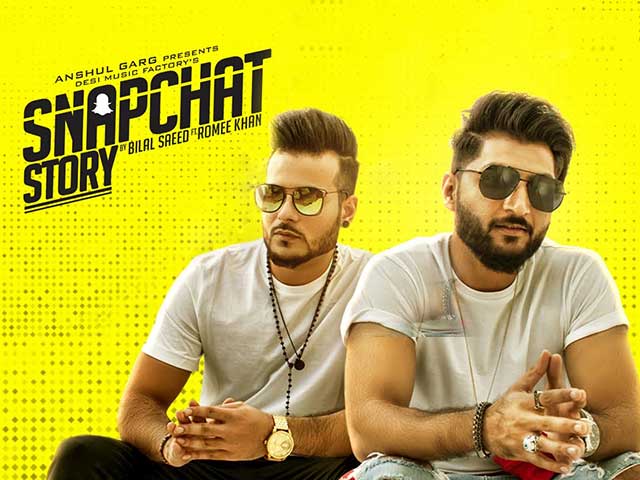 For those who might not be familiar with Bilal Saeed, he is a Pakistani singer, songwriter, music producer and composer. He is mainly known for his RnB and pop music, themost critically acclaimed work of histill date being the2012 album Twelve. After his 2016 release of the song Sukoon which he both composed and wrote, rendered by Asim Subhani, Bilal was quite MIA, except the release of one of his singles, Khair Mangdi, having been remade for Karan Johar’s Bollywood movie Baar Baar Dekho. In 2017 he only released three singles “No Makeup”, “Twinkle Twinkle” and “Suroor”.

His 2018 began with a bang too as he released another single, La La La, written, composed and produced by him and sung by Neha Kakkar and Arjun Kanungo. Even before his fans could settle with this song, he announced and released his next song, his latest, Snapchat Story, featuring Romee Khan. The song got released on 28th April and has, since then, garnered over 27 million views in a week. Mixing being done by Ali Mustafa, the song has a summer EDM vibe in its music production. Apart from writing the lyrics and composing the song, Bilal has lent his voice to this song as well, along with Romee.

While the music video is every generic Punjabi music video, with the two singers posing as the protagonists, serenading their lady love with their expensive gifts, “Jaguar” and “five-star” as the refrain of the song repeatedly refers to, the frames are quite aesthetically pleasing with a white based, mostly neutral color scheme and smooth transitions between scenes. The video ends in complete fading out of the last scene where the girl in the video, who so far has conned one of the two friends and has been conned in return by the other friend, is seen pointing a gun at both of the men, while as the screen goes black, two gunshots are heard.

Judging by the comment section down the song, fans are equally taken aback and amused at the versatility of Bilal Saeed as a musician, since a lot of them were not expecting him to create an EDM based song like this, and they rather anticipated his return to his ballad days. But this pleasant surprise has rather been well received. Hope you are ready to shake a leg or two because the song is perfectfor your summer pool parties. Happy jamming!