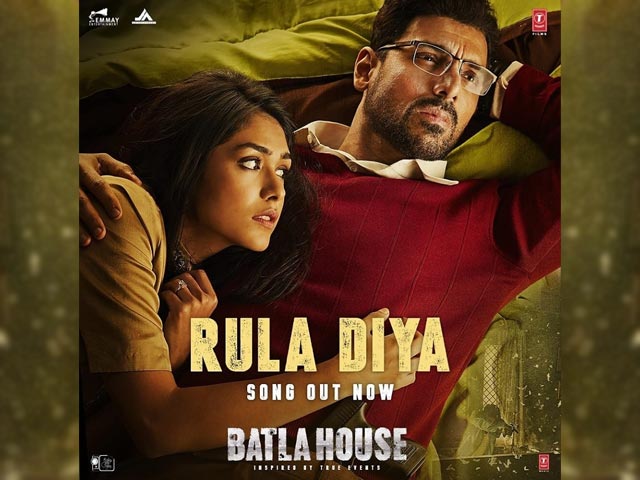 Batla House has just had another song from its soundtrack release in the form of ‘Rula Diya.’ This one’s a sad track that speaks about a relationship that was. The song’s video features the two lead actors from the film, John Abraham and Mrunal Thakur. It has been composed by Ankit Tiwari, while the lyrics have been penned by Prince Dubey.

Ankit Tiwari has composed ‘Rula Diya’ extremely well. He has done full justice to the lyrics, giving an equally poignant tone to the composition. The singing duties too are being handled by him, along with Dhvani Bhanushali. They do a splendid job at rendering this track.

This is only the second song from the Batla House soundtrack. The first one was ‘O Saki Saki,’ a shabby remake of the original song featured in 2010’s Musafir. The song stars Nora Fatehi, and has been composed by Tanishk Bagchi. Koena Mitra, who had featured in the original song, had criticized this one for its poor nature, although she was all praises for Nora’s performance in it.

Batla House, as its name suggests, is based on the real-life Operation Batla House that took place in 2008 against Indian Mujahideen (IM) terrorists in the Batla House locality in Delhi. The film stars John Abraham and Mrunal Thakur, along with Ravi Kishan, Manish Chaudhari and Rajesh Sharma.

August 15 has been marked down as the release date of Batla House, which means it will be clashing with Mission Mangal, the star-studded movie based on India’s Mars orbiter mission.