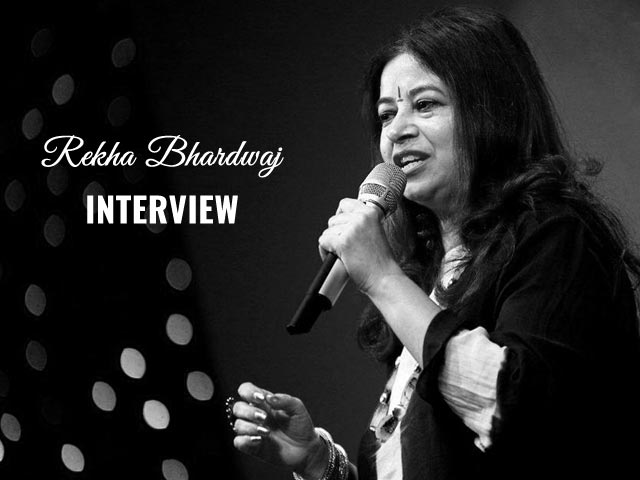 It was a nice change to see this beautiful singer dressed in western formals for a change. She looked petite and different from her usual self. For a minute I couldn’t recognise her minus her signature red bindi and those beautiful handloom sarees that we’ve normally seen her gracefully carry. But what she had was her trademark sindoor even though she was dressed in a formal skirt and blazer and that set her apart.

Rekha Bhardwaj needs no introduction. She has sung some of the most soulful songs and most of the songs she has sung are beautifully intense. She has a certain mesmerising folk, Sufi tone in her voice which is so soothing. Rekha is back again on the new season of MTV Unplugged and we’re very happy! I especially have loved her Ladki. When I mention that to her she gives me a lovely smile and we settle down for the interview. She talks about the MTV Unplugged Season 8 and more.

Such a huge difference, every year is a different experience. Season 1 was curated by Ranjit Barot and he was under tremendous stress because he had to arrange 70 songs in a limited amount of time. Nobody knew how much would go in the production and the post production which is a lot of work. It was very challenging. Now too we sing 6 songs in a day but then we have been preparing those songs for a month. This time I got two weeks to prepare but we were aware about it a month back. Those days we got only a day of shoot and rehearsal, it was very tiring and taxing. Though the experience was good. Every year there is improvement.

What is special in this new season of the MTV Unplugged

What is special this year is that we got to choose our teams. We got to choose the songs we are to sing, the instruments we want to use, the music arrangements we want and all that has made a difference. It has added a lot of quality to our episodes because it is completely my responsibility and hence we put in our very best. Having said that, then also we gave our best but when we have the freedom to choose we do better.

Your songs have a different approach, there is more of a folk and traditional reflection. Where do you draw your inspiration from?

Firstly the earthiness in my voice comes from my roots, my roots are very classical.I’ve grown up listening to classical music, semi classical music, ghazals, thumri etc. From childhood I learnt Hindustani classical music, I followed the Indore Gharana. Till date I do my riyaaz for two-three hours. About lyrics when you are singing Gulzar Saab’s lyrics where do you need any inspiration? And to top that if Vishal Bhardwaj is composing the song then it’s like an icing on the cake! AND if Shankar, Ehsaan and Loy are doing the song or if A R Rahman is doing the song then the package is strong already! My work then is to feel the song and prepare the songs.I claim my songs, make the songs mine so I think when I sing that’s the quality that comes across.

Audience wants to connect to such songs like Ladki, but in an age where remixes are being made etc. do you think we should include such songs in Bollywood as well?

Wherever I go everyone asks me about it, they say; “You’ve sung Ladki. We love that song!” Just like we want to watch a good content based movie, so is it with music. What is happening is that the public does not have a choice, I want to hear a good song but if that is not available then we have to make do with what is available. If we give quality to the audience they will like it, it’s a matter of reaching to the audience. So many times our work does not even reach the audience and everyone craves to listen to good music.If we give good music, there is an audience for good music too.

How can we bring folk music beyond just a cultural reference?

The base for all genre of music is folk. Folk has its own fragrance, it should blend well with what we are doing. There have been so many instances where folk songs have been blended with filmy music and that sounds terrible. It’s like eating half a paratha with half dosa or a noodle dosa!

How do we bring folk music to the current generation?

A lot of children have explored folk music through Coke Studio especially the Pakisthan one, children have discovered folk, ghazal etc. They’ve heard ghazals by Begum Akhtar etc. The Coke Studio Explorer on Netflix have brought some great folk songs. That way this generation is also getting exposed to it. For example my song made me listen to Kabir’s dohas somewhere.

What do you think of the actors and not the singers going around to promote the songs from the movies?

Well, it’s because actors add a face value to the songs and that’s necessary to promote the song. Because if the actors are singing our song on screen, then the audience goes to watch it, that way they listen to our songs. So it is necessary to have a face value but what I don’t agree to is the actors going to the Radio stations to promote the songs!

Any message for the younger generation and budding singers?

The younger generation are doing very well. They are good at multitasking from music production to singing to playing instruments because they have got good exposure. The only thing I feel they need to do is pay attention to diction, meaning of the Urdu words, otherwise I feel the youngsters are a highly talented breed.