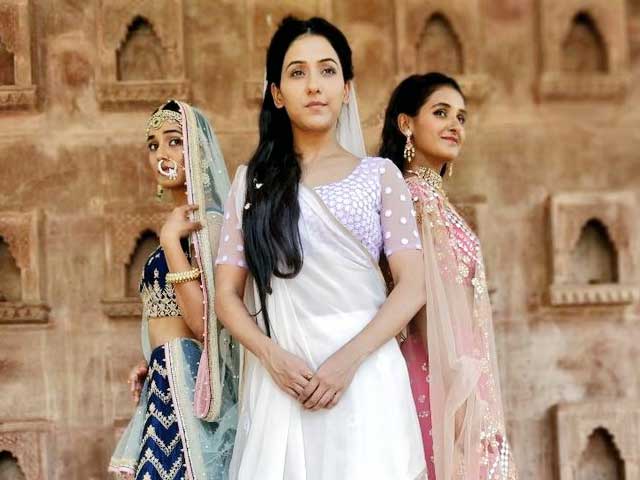 Neeti, Kriti, Shakti and Mukti, the multitalented Mohan sisters are a household name today. While Neeti the oldest of the four has carved a niche for herself as a singer in Bollywood, Shakti has made her name as a dancer and Mukti as an actress. Although not in the limelight, Kriti plays the role of managing the professional assignments of her sisters.

The four sisters have collaborated for the first time for a song called Kanha Re sung by Neeti, while the video features her and her sisters Shakti and Mukti as gopis and Kriti is responsible for all the management and seeing that everything runs smoothly. While Shakti and Kriti were out of India for other commitments. Neeti and Mukti spoke exclusively to HotFridayTalks.com about their collaboration and more.

My dear friends & followers, me and my family did a dance routine for the first time together and the feeling is indescribable. But the most difficult part is to get every family member to do it. @mohanshakti managed this quite patiently. And the mantra is "don't give up 😄" Get your parents, siblings, spouse, Uncle, Aunts, pets, domestic help and even walls 😜to mark a moment like this on your social media. It's really awesome! I nominate @harshdeepkaurmusic @mankeet_singh @tahirakashyap @ayushmannk @aparshakti_khurana @aakritiahuja & family and all of you to carry forward this challenge. I know you will SHINE at this challenge especially with a retro number ~ Dhina dhin dhaa! #happydancedaychallenge #internationaldanceday @nrityashakti #Repost @mohanshakti ・・・ FAMILY DANCE – Most memorable dance of my life with the entire family and on my dad's favourite song "Nain lad jaye be manwa" How much fun we had doing this…. Thank you @nrityashakti for #happydancedaychallenge #internationaldanceday I am passing this awesome challenge to @imouniroy and @raghavjuyal Have fun 🤸🏻‍♀️

Tell us a little more about Kanha Re

Neeti: Kanha Re is an audio and visual treat, we wanted to do something very close to our roots and culture, something we have been brought up with. It is an independent song, as I want to do independent work as much as I am doing Bollywood songs. Kanha Re is something that I had learnt during college and I used to sing it so often at home that Shakti and Mukti also learnt it and started humming it and performing in school and college. It is like our song.

Mukti and Shakti are trained classical dancers, did they give you any tips on dancing?

Neeti: Mukti would ask me to feel and enjoy the dance steps while we were practicing. It took me 15 to 20 days to learn it.The choreography was choreographed by the one who choreographed Deepika Padukone’s dance steps in Ghoomar. She did a great job and at such a speed that it’s unbelievable!

It’s nice to see young people like you come up with something so traditional. How do you think songs like these will be liked by the youth?

Neeti: We represent youth and when they see the three of us doing something traditional, the youth will feel ok that is very Indian, that is what we are. We are proud of our culture but because of the internet we have access more easily to western music and because of that we are able to blend the two. With Kanha Re. it’s more of the pure form that we have tried to bring. Having said that, in other songs like Naino Wale in Padmavat, it is very Indian but a lot of Western instruments are also used in that song, so it’s a great blend. As long as we don’t forget our roots and there is a good balance then it’s great!

(Neeti interrupts her and prompts her to talk about her dance workshop in Puducherry while informing me how every actor and artist should do that workshop)…Mukti continues and tells us about how she had people who were lawyers and doctors attend her workshop.

It was all about doing Kallari, eyes exercise, playing drums as it is good for circulation and swimming because one is using their diaphragm underwater and doing navras. All of it makes them aware of how you can take charge of things through just the breath. It is rooted in Natyashastra.

Neeti: To sum up this whole west influence on the youth all I’d like to say is that It’s basically like how you can go home and eat pizza maybe once in a while but daal chawal is staple and it’s your comfort food so that’s the same with Indian music, it’s like our daal chawal, it’s what we are comfortable with!

Neeti you have worked with Sanjay Leela Bhansali, we’ve heard that he’s a tough taskmaster. How was your experience?

Neeti: Working with Sanjay Bhansali is such a joy. He is a perfectionist but these are the kind of people who will push you, the people who will bring the best out of you.

Do you think there is space for independent musicians/singers where film music dominates?

Neeti: Being an independent singer and musician is not difficult but challenging and if you do something that is very Indian and devotional, it is even more challenging. But for me who does a lot of Bollywood songs, I feel that sometimes I must do what I like to or want to do.Along with the remixes like Naam Mera Mera or a Bang Bang, Western Jazz album like Bombay Velvet, I also want to showcase this side of me and every artist has so much of variety, I feel we should all aim at being versatile and try to do well.

Remixes Vs Originals, What do you prefer?

Neeti: I am someone who prefers the originals but I have sung a lot of remixes too like Har Kisi Ko, Naam Mera Hai Mera, Tumhe Apna Banane Ki.

Mukti: There are so many remixes, every film has at least one remix in their film. That’s probably because the producers want listeners to immediately connect. The patience level of people today is just a swipe of a finger so they want the listeners to connect. What makes them connect is the old memory of a song in a new package.

All four of you sisters work together, do you have creative differences and fights?

(Both of them together) Of Course! (Laugh!)

Neeti: We have a lot of arguments and fights. There are so many creative differences but what is good is that we have our departments.

Mukti: If it is anything to do with singing and music then it is Neeti’s department and even if we are wrong sometimes, we give in and surrender because we know she has the knowledge in that and an expert in that department.

Neeti: When it comes to dancing then it is Shakti and when it comes to dance and performance, it is Mukti and Keerti manages all of us! Kriti was the one who stood in the line for me for many hours to take part in the reality show which changed my life.

Tell us about some funny moments while shooting Kanha Re

#KanhaRe has reached 3 Million just by word of mouth and your love. Sharing this behind the scene dance rehearsal video. Yes we break into “Kaho na pyar hai” anytime hahahahaha. We love you all. Thank you ❤️ @nrityashakti @mohanshakti @muktimohan @krutimahesh @shetty_tejaswi

Neeti: Because we were wearing very heavy jewellery during Kanha my Jhumka would fly off or my ‘choti’ (braid) would go and slap Mukti’s face and she would start crying in pain and we had to stop the shoot. The highlight was while dancing Mukti’s payal flew off but it was a lot of fun!

What is that one song that you must have on your playlist?

What is that one thing you would like to tell the youth who want to get into music and dance?

(Mukti speaks for both of them and Neeti agrees)

Mukti: Research well, follow yourself and that could start a legacy.

The talented Mohan sisters are on their way to starting a legacy of their own! We wish them all the best!