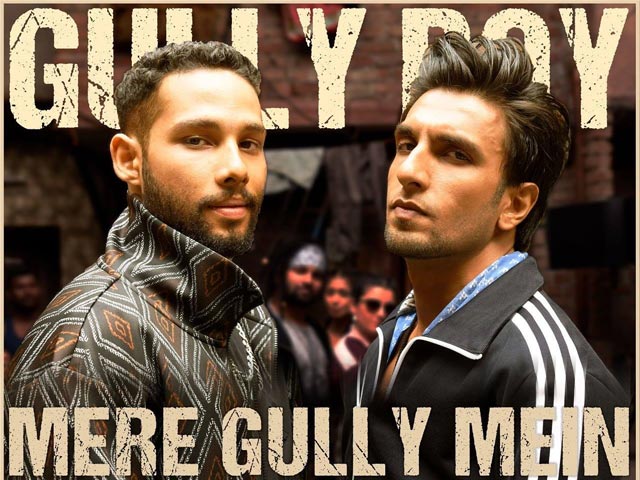 We knew from the start that the story of Zoya Akhtar’s Gully Boy is loosely based on the lives of Divine and Naezy, but more proof of the same is the newest song from the film. It’s a recreation of the two rappers’ biggest hit together, Mere Gully Mein. The new version has of course been sung by Ranveer Singh, with backup vocals from Divine and Naezy. This is the third song from theGully Boy soundtrack to have been released online.

Mere Gully Mein was the song that brought its two lead creators mainstream fame. Prior to that, they were confined to the underground hip-hop scene, with a pretty limited audience. This song was actually released by Sony Music India, and managed to grab immense popularity among music lovers.

The main credit for the same goes to the grounded lyrics delivered in an everyday street language that many could relate to. And then there was the content. While previous rap music from India consisted only of imitating American rappers by talking about fast cars, girls, expensive things and other such stuff, here were two booming artists who spoke about growing up in chawls and living their lives on the streets.

This was the novelty being provided by the lyrics of Mere Gully Mein. And of course, there was the spectacular music by Sez, who is back for the Gully Boy version of the song as well. The same lyrics have been used in this version, but there are minute alterations in the delivery pattern byRanveer Singh, perhaps to add a touch of his own into the mix.

Asli Hip Hop was the first song to be released from the Gully Boy soundtrack, after it was featured in the film’s teaser. Then came Apna Time Ayega, the foot-thumping anthem that took music lovers by storm. Mere Gully Mein is the third song from an album that’s expected to deliver much more than just this.

Gully Boy has been directed by Zoya Akhtar, and has also been written by her, along with Reema Kagti. Apart from Ranveer Singh, its cast includes Alia Bhatt, Kalki Koechlin, Siddhant Chaturvedi, Vijay Raaz, Amruta Subhash, Sheeba Chaddha, Vijay Verma, Vijay Maurya and others.

February 14 is when Gully Boy will be hitting cinema screens across India.