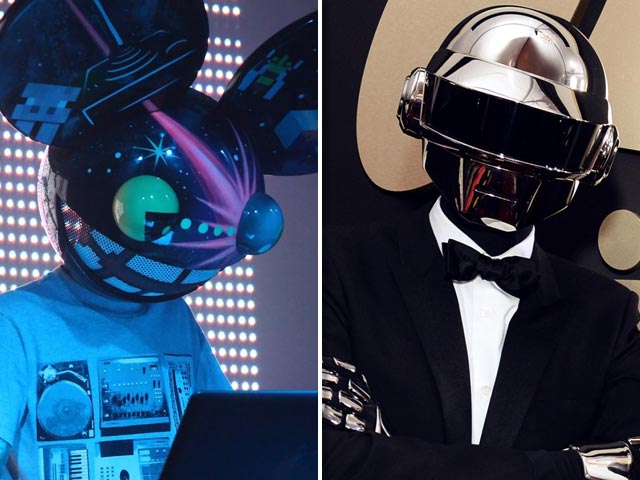 When it’s superheroes trying to hide their identities from everyone we can understand because we know what will happen if they let the world know who they are. But music artists have to face no such outcome. It’s hence quite strange to see them hiding behind their masks. However, there might be several reasons behind them having taken the garb, that may never have crossed our minds. It’s no use trying to figure out their reasons, and we must hence focus on what matters the most – their music.

This French electronic music duo features the talent of Guy-Manuel de Homem-Christo and Thomas Bangalter who keep their faces hidden inside luxuriant helmets and gloves to assume robot personas. These guys have been given us breakout hits over the years, in the form of songs like Get Lucky, Da Funk, Digital Love, Technologic and more.

Joel Thomas Zimmerman from Canada is one of the top DJs in the world right now, and is most recognizable for his unique avatar that is characterized by his huge mouse-like mask. In case you’re wondering how to pronounce his name, it’s simply “dead mouse.”

When this band entered the scene back in the 1990s, they not only had the freshest sound in heavy metal music, but also the creepiest appearance. They complement their scary masks with jumpsuits, and manage to create mind-blowing heavy metal music.

Now here is something that’s one of a kind. Gorillaz is a virtual band which prefers to be represented by their animated avatars. Their alternative rock music has been enthralling fans since years, and same goes for the fictional universe that they have created with their avatars.

One of the most influential bands of its time, Kiss was ruling the roost back when MTV was still at its nascent stage. Their hard rock brilliance resulted in some of the biggest rock hits of all time, but the band is still more famous for their outrageous face paint and stage outfits.

Brian Carroll, popularly known as Buckethead, is again someone who will creep the hell out of a little kid who sees him for the first time. His expressionless plain white mask is complemented by a KFC bucket which covers his head.

Read Also: Get Updates From Your Favourite Musicians Now Just By Googling Them