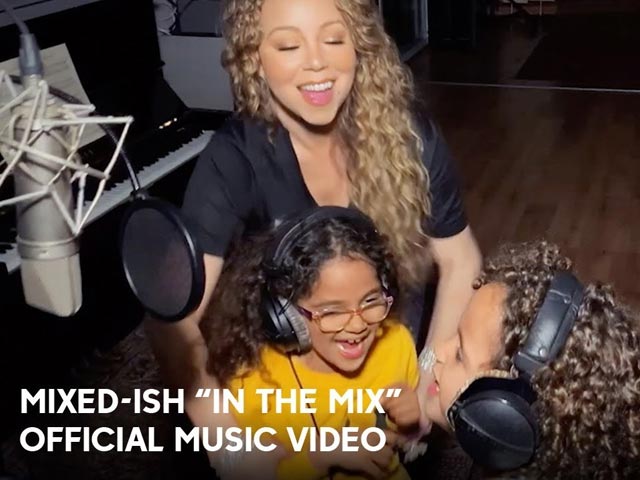 Mariah Carey has released a new song called ‘In the Mix,’ which is all set to act as a theme track for the upcoming ABC sitcom, Mixed-ish. A music video has also been launched along with the track, which features clips from the TV show as well as footage of Mariah Carey singing in the studio. Moreover, her kids, Moroccan and Monroe, also make an appearance in the video. This clip was first shown as part of the new show’s Embrace Your Ish premiere event. The first episode of Mixed-ish is slated to hit ABC in the US on September 24.

‘In The Mix’ has a classic disco vibe to it, which is not surprising given that the show is set in the 1980s. There’s a strong R&B groove to the song, while the melody is quite energetic. Mariah Carey renders the lyrics beautifully, and absolutely kills it in the hook portion, which goes, “Oh, they keep trying, but they can’t stop us. Cause we got a love that keeps rising up.” She doesn’t lose this top form during the chorus, which goes, “In the mix, life turns around. Round and round it goes. It’s a mixed up world, that’s for sure. But in the mix, we’re gonna get by on our own, side by side. That’s all we need to be free. I got you, you got me.”

As per The Wrap, Mariah Carey said in a statement, “As a biracial woman in the entertainment industry, there was no way I did not want to be a part of Mixed-ish, especially after seeing the pilot, which I loved,” Carey said in a statement, per The Wrap. “I could not be more honored and proud to be writing and performing ‘In the Mix’ for [show creator] Kenya [Barris] and the show.”

Mixed-ish is a spin-off prequel to the hit show Black-ish, which has been running on ABC since 2014. Its story is based on the early years of the character, Rainbow Johnson as she recounts her experience growing up in a mixed-race family in the 1980s. As we said, the show’s premiere is set for September 24.