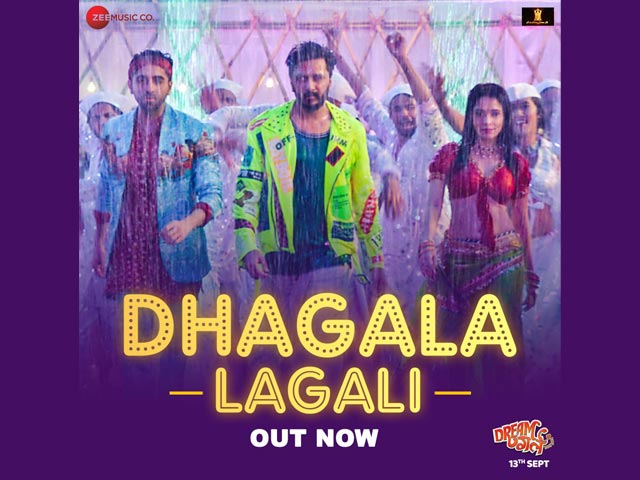 ‘Dhagala Lagali’ is the latest song from the soundtrack of Ayushmann Khurrana’s upcoming film Dream Girl to be released online. This is a promotional track, and its video also features Nushrat Bharucha and Riteish Deshmukh. ‘Dhagala Lagali’ is of course, a modern take on the song ‘Dhagala Lagli Kala,’ featured in the 1985 Dada Kondke film of the same name. This version has been composed by the Meet Bros, who have also provided vocals for it, along with Mika Singh and Jyotica Tangri.

‘Dhagala Lagali’ has been shot to show a Ganpati procession, which Riteish Deshmukh, Nushrat Bharucha and Ayushmann Khurrana are attending. It starts with Riteish complaining that all promotional songs of films these days are in Punjabi, and suggests they sing a Marathi number instead. ‘Dhagala Lagali’ has been composed as a heavy EDM song. It’s a high-octane track from start to end, and really manages to make you want to get up and dance.

The lyrics have been written by Kumaar, and are a mix of Hindi and Marathi lines. This is the kind of song that suits Mika Singh’s voice very well. Jyotica Tangri’s verse has also been sung very well by her. Despite all this though, ‘Dhagala Lagali’ doesn’t manage to beat the DJ Akbar Sami remake of ‘Dhagala Lagli Kala,’ which was released during the early 2000s.

Dream Girl is a romantic comedy that has been directed by Raaj Shaandilyaa, who is best known for writing scripts for several of Kapil Sharma’s shows. The film’s story has Ayushmann Khurrana impersonating a girl’s voice and giving love advice to people. Apart from Ayushmann Khurrana and Nushrat Bharucha, it also stars Annu Kapoor and Vijay Raaz.

Dream Girl is slated to hit theatres across India on September 13.

Sunanda Sharma’s Songs That Could Make Your Day