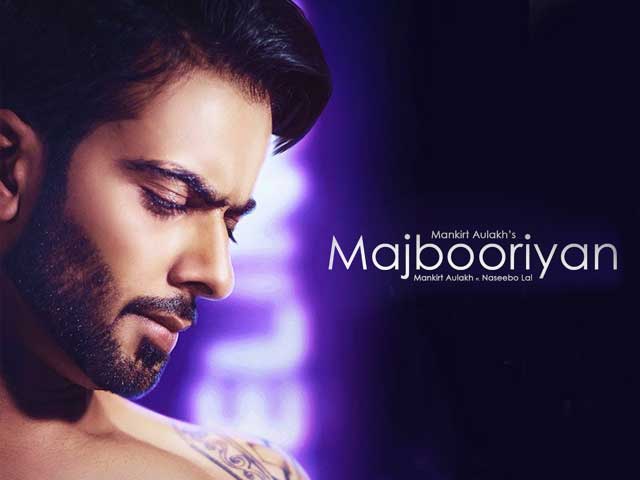 Having acquired fame after his Daaru Band, the rising Punjabi singing star, Mankirt Aulakh’s latest song, Majbooriyan is sure to achieve considerable success. The song is a duet by Mankirt Aulakh and features Naseebo Lal, the famous Pakistani singer. Mankirt has penned down the lyrics of his latest release with Lally Mundi. Going against his own style of peppy and groovy Bhangra Punjabi songs, Mankirt has touched our hearts with this emotional song.

Other Punjabi singers of Bollywood, namely Badshah and Honey Singh, has won the audience by giving innumerable dance numbers which we still keep humming, but Aulakh’s Majbooriyan is a class apart as deep down it tugs at our heart strings, expressing deep feelings of compassion. The ones betrayed in love will definitely relate to the song more than the ones who have not been there yet. The song’s lyrics is mainly about intense love and the following betrayal. Having said that, Aulakh, very beautifully, and in a soulful tone, depicts the agonizing man who is left by his beloved for no apparent reason.

The music composer of this song, Deep Jandu, has blended the song with a soothing mixture of soft beats and mellifluous rhythm. Deep Jandu is fast gaining popularity with his quintessential Punjabi numbers, the very recent being Hadd, which became quite popular with the music lovers.

Though Mankirt Aulakh had tried his luck with emotional numbers prior to this, it did not reach out to the audience on a large scale. Therefore, he stuck to his comfort zone of the groovy numbers. However, this time, with added confidence and self-composed lyrics, Majbooriyan is certainly going to be well received by the audience. His Bhangra numbers indeed grab a lot of attention and we cannot help but tap our feet to it, but change being the only constant, it is only fair that Mankirt Aulakh tried his hand at something completely different, something out of the box.

Aulakh’s famous Bhangra tracks include “Khayal”, “Choode wali baah”, “Gangland”, “Jatt di Clip”, and “Kadar”, which became pretty famous. The studio version of Mankirt’s latest song, Majbooriyan was released on 26th July, 2018. Let us keep our fingers crossed, hoping that the rising songster achieves the much deserved praise for his new release. It indeed takes nerves of steel to try something this different.