HotFridayTalks
Home Music Made In China’s New Song ‘Valam’ Is A Love Ballad Sung By... 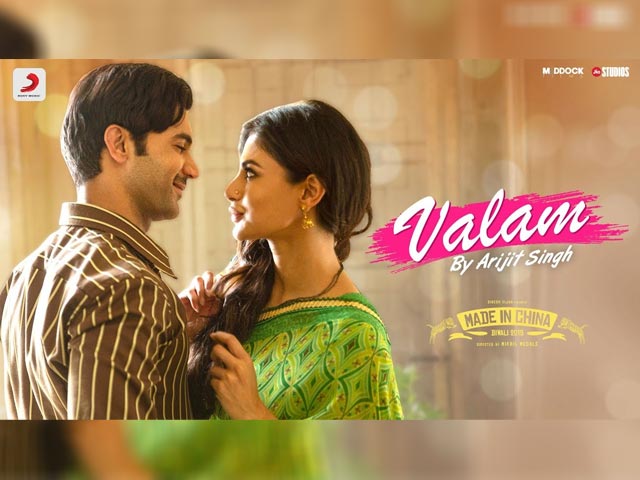 The fourth song from Made In China’s soundtrack is out now in the form of ‘Valam.’ This one’s in stark contrast to its other tracks however, as it’s a slow love ballad, rather than a party track. Arijit Singh croons the song along with Priya Saraiya, who has also written the lyrics. It has of course been composed by Sachin-Jigar, who have composed all the songs from the album. A music video featuring new footage from the upcoming film has also been launched.

‘Valam’ reminds you of ‘Saibo,’ another Sachin-Jigar track from 2011’s Shor In The City that was mesmerizing with its music. While ‘Valam’ comes nowhere close to the greatness of the said track, it’s definitely a track you’d want to listen to a few times. It’s got a romantic vibe to its music, and the lyrics too are good. Arijit and Priya give great vocal performances in this song, that enhance its appeal furthermore.

The music video features Rajkummar Rao and Mouni Roy, and showcases their everyday romance in the film. ‘Valam’ is the fourth song to have been released from the Made In China soundtrack. The first two were ‘Odhani’ and ‘Sanedo,’ which were remakes of popular garba numbers. As for the third song ‘The Naari Naari Song,’ it was also a remake of a popular Egyptian-Indian song from the early 2000s.

Apart from Rajkummar Rao and Mouni Roy, Made In China also stars Boman Irani, Paresh Rawal, Amyra Dastur, Gajraj Rao, Sumeet Vyas and Manoj Joshi. It is the story of a Gujarati businessman who goes to China with the hope of improving his business prospects. The film has been directed by Mikhil Musale, and is slated to be released on October 25.

Siblings Who Have Been Rocking The Musical Industry