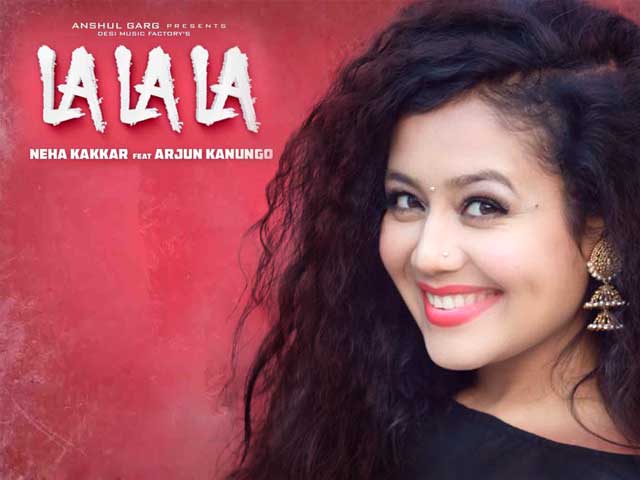 La La La the new song by Neha Kakkar and Arjun Kanungo is finally out. While the lyrics of the song have been written by Neha, the song is a duet by Neha and Arjun. The song is a Punjabi duet with music is contributed by Bilal Saeed, while the video is directed by Lakshya Anand.

La La La is basically a conversation between a girl and a boy who are in love but having a fun argument. La La La comes after the huge success of Bilal Saeed and Neha Kakkar Punjabi song Suroor. Neha plays herself in the video, she is shown as a glamorous singer who is telling

The video opens with a phone ringing and the computerized message on the other side saying, “The number that you have called is busy at the moment. Please try again later!” The music is peppy and hummable. Arjun sounds like he was born to sing and sings in the most casual way, yet sounds good! Neha’s voice is sensuous and almost feels like she is smiling all the while singing this song especially the lines where she says; “Gaane mere hi tu gaavenga La la la, la la la Jadon gaddi tu chalavenga La la la, la la la….” She also looks stunning in the shimmery outfit that she is seen wearing in the video.

The video ends with a message from Neha and Arjun telling the viewers how much fun they had shooting the video and also asking all their fans to like the video! Absolutely Neha! We bet everyone is going to give a thumbs up to this absolutely peppy number and we bet this will be one song that will be played by every munda while they are ‘chalaveng’ their gaddis!

‘India’s Got Colour’ Video From Nandita Das Addresses Our Obsession With...