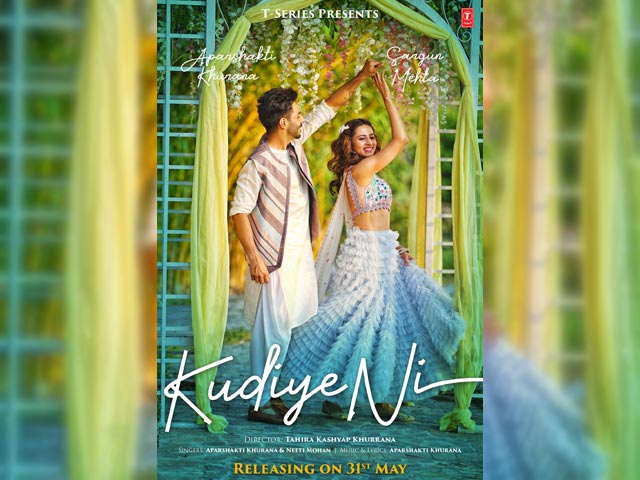 As expected, Aparshakti Khurana has launched his first ever song called ‘Kudiye Ni.’ This track has also been blessed with a music video by T-Series, which has been directed by his sister-in-law, Tahira Kashyap. Apart from Aparshakti himself, the video also stars Sargun Mehta. ‘Kudiye Ni’ has been composed by Aparshakti himself, while the singing duties for this duet have been handled by him along with Neeti Mohan. And no prizes for guessing that the lyrics have also been written by him.

Right from the start, the song lets out a pleasant vibe with its music. Nothing seems to be overpowered, as everything from the musical arrangement, the lyrics and even the singing is well balanced. The song is also very catchy. The music arrangement by John Stewart Eduri deserves special credit here. His use of the acoustic guitar in the interludes is almost magical. The composition doesn’t give Aparshakti much scope to explore his singing talent, but he impresses with whatever he does sing. And of course, Neeti Mohan is at her excellent best.

Coming to the music video, it takes place during the wedding celebration of Aparshakti’s friend, where he meets his childhood crush, Sargun. After that, it’s the standard affair of the man trying his best to get the woman’s attention, and the woman getting wooed only in the end, after keeping him on the hook for some time. The generic music video won’t impress many, but it benefits from the great song that ‘Kudiye Ni’ is.

Aparshakti’s brother Ayushmann Khurrana has a successful music career to his name, which he would definitely like to replicate. Ayushmann has sung a song in the soundtrack of almost all the films he has acted in till date. His most famous track however, still remains ‘Pani Da Rang’ which he wrote and composed himself, and was featured in his debut film, Vicky Donor.

You can watch the music video of Aparshakti Khurana’s ‘Kudiye Ni’ in the space above.

Ed Sheeran Names Eminem, Cardi B, Khalid And Others As Collaborators...