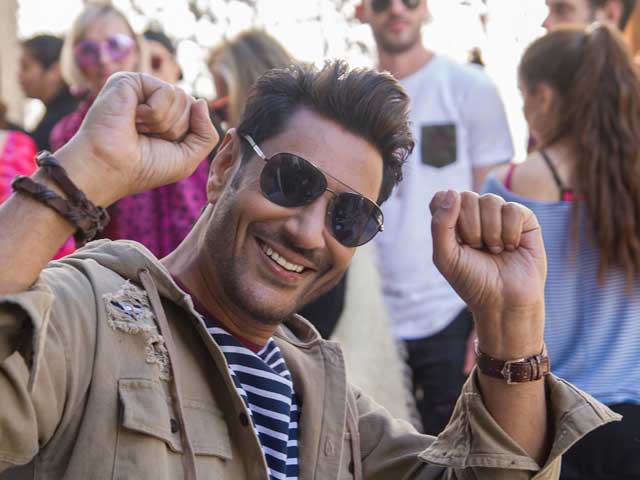 Continuing its practice of regularly releasing Punjabi singles, T-Series has launched Kangan which happens to be a song from popular artist Harbhajan Mann. It was released yesterday, but it’s already boasting of more than 2 million YouTube views right now.

As its name suggests, the song is about bangles. Customary to the typical Punjabi music video style, it features the singer wooing a girl who falls for him in seconds. She then obviously keeps chasing after him in the exotic locales of Athens and Santorini in Greece.

Zero work seems to have gone in to the scripting of this music video. It’s only the visuals that are beautiful and those too, due to the fact that the video has been shot in beautiful locations. Apparently, this is the first ever Punjabi music video to have been shot in Greece.

Coming to the song itself, it’s again not at all impressive. It supposedly came through after a jam session, and eventually turned into the song it is today. The single has been created over the span of two-and-a half years, but frankly, it doesn’t seem like that much work has really gone into it.

While Harbhajan Mann acts as the sole singer, the music has been composed by Jitender Shah and the lyrics penned by Babu Singh Maan. The music has a slight Arabic feel to it, which is highlighted by the guitar pieces inserted into the song. The guitar sections are worth appreciating.

Apart from singing, Harbhajan Mann has also tried his hand in acting with a quite a few appearances in Punjabi flicks. Jag Jeondeyan De Mele, Dil Apna Punjabi and Saadey CM Saab are some of them.

His hit songs from the past include Jinddriye and Gallan Goriyan, among others. He had recently also featured in T-Series’ Mixtape series on YouTube which treads along the same line as Coke Studio. This video is currently standing at 3 million views on YouTube.

Kangan is Harbhajan’s first single in two years, and in his own words, he is sure that “fans will lap up the picturesquely shot song.” Seeing the views that it has got on YouTube within a day, it looks like that has turned out to be quite true.