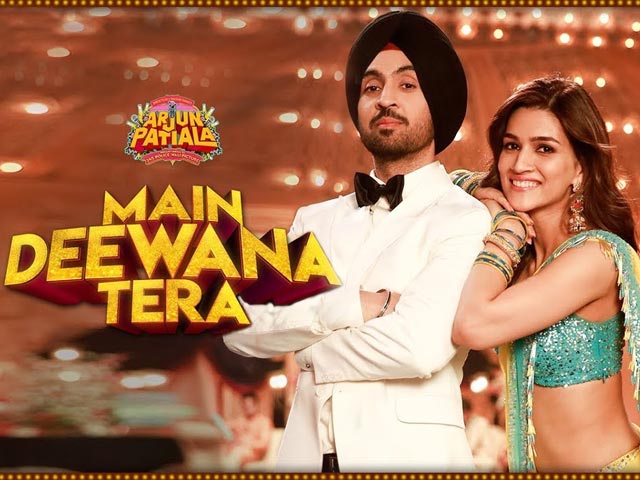 After the trailer of Arjun Patiala impressed us with its comic take on Bollywood clichés, the makers of the film have released the first song from its soundtrack. This is a Sachin-Jigar number that has been sung by Guru Randhawa. Called ‘Main Deewana Tera,’ it’s an upbeat track, the video of which has Diljit Dosanjh trying to impress Kriti Sanon. It’s available for listening via all major streaming channels, while its music video is live now on the T-Series YouTube channel.

Most of Guru Randhawa’s songs used in Bollywood films have been his own compositions, but this one is a Sachin-Jigar number. And it even feels like one, given its musical leanings. We were reminded of the hit ‘Kamariya’ from Stree while listening to it. But it’s not to say that ‘Main Deewana Tera’ is just a rehash. It’s got a character of its own, what with its trumpet portions, its drum-based progressions and more.

Guru Randhawa’s voice has been used in the same way it’s used in other tracks – with heavy auto-tune. It’s a song that suits his style pretty well, and he is hence able to pull it off. The lyrics, which too have been written by him, are your typical affair. Take these lines for instance, and judge for yourself – “Jaane jaana meri jaanemann. Body teri lage like diamond. One in a million baby girl. Dekhun tujhe toh mera nikle hai dum.”

Arjun Patiala is a film that parodies cop movies. It has been directed by Rohit Jugraj, who has so far only directed Punjabi films. Apart from Diljit Dosanjh and Kriti Sanon, it also stars Varun Sharma, Ronit Roy, Seema Pahwa and Mohammed Zeeshan Ayyub. It has been produced jointly by Bhushan Kumar and Dinesh Vijan.

Arjun Patiala will be released in theatres across the country on July 26.