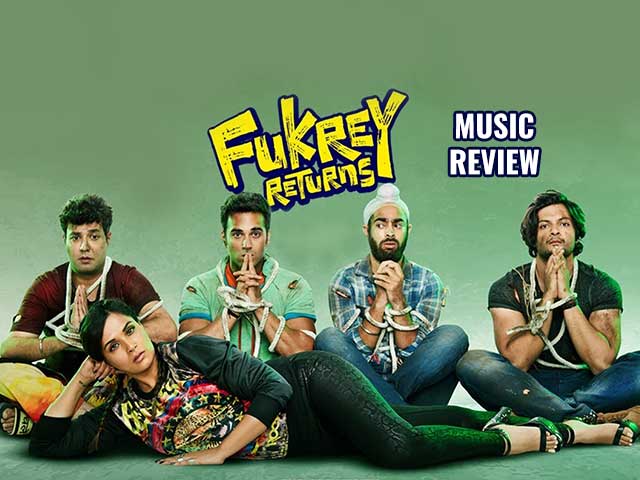 It’s time for us to jump into another fun adventure, even as the Fukrey boys are returning once again to the big screen. Fukrey Returns promises to be as entertaining as its prequel, and we just can’t wait to watch the film. In the mean time however, we can gorge on all the songs from the film, as the album has gone live on all popular streaming platforms.

It starts with the melancholic Peh Gaya Khalara composed by Jasleen Royale. It has a few singers handling the vocal duties, but it’s Jasleen’s innocent voice that stands out. It’s a peppy number which creates a sombre mood at the start, and seamlessly transitions into bhangra beats.

Ishq De Fanniyar seems to be the Ambarsariya of Fukrey Returns. It tries to create the same atmosphere with its music and vocals, although this time around the singing duties are being handled by Jyotica Tangri instead of Sona Mohapatra. A male version of it is also present in the album, and it’s sung by Sharib-Toshi.

Bura Na Mano Bholi Hai is a fast paced track. Composed by Sumeet Bellary it’s a beat-heavy song with a rap sequence accompanying the high-pitched vocals. The best lyrics from in this album can definitely be found in Tu Mera Bhai Nahi Hai. It’s a song about how friendships between most men work. The lyrics “Fight bhi hai saath mein tere. Hona tight bhi saath mein tere” try to get the point across, and they do so successfully.

Raina, a slow paced song about hope, is a weak link in the album, while Fukrey Returns is an average track which tries to create a grand atmosphere with its music. A big highlight is Mehbooba which is a reprised version of the original Rafi song from the film Dharam Veer.

The song just uses the chorus of the original and replaces the other parts with hip-hop beats and rap-like vocals by Neha Kakkar. But the brilliance of this track lies in the magic that Raftaar brings to it.

Fukrey Returns is a nice overall album, but a few average songs stop it from becoming great.

Know All About The complete jukebox of fukeray returns right here:

Wake Up The Patriot In You With This Independence Day Playlist