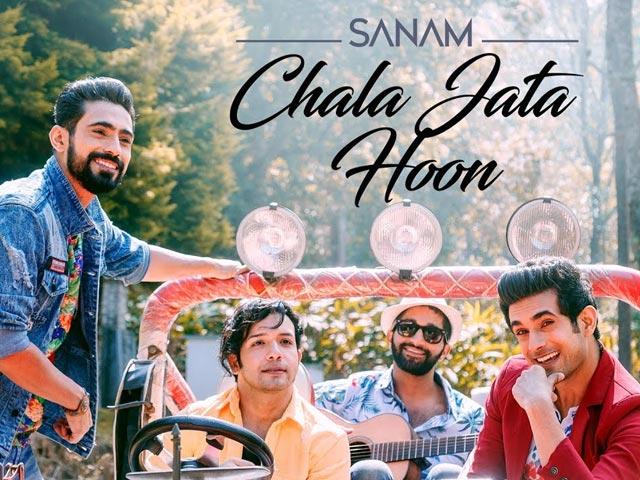 Remember the boy who stole our hearts by recreating romantic songs like Lag Jaa Gale and Yeh Raatein Yeh Mausam with much finesse? Yes, we are talking about Sanam Puri here, who is already a celebrity YouTuber and who is very famous for remixing and reinventing old Hindi songs and even a few Rabindra Sangeets in Bengali. He has already got a huge female fan following who are not just after his chocolate-boy looks but his very romantic voice which is soothing to the ears. He, along with his brother Samar Puri, and two of their friends, Venky S and Keshav Dhanraj, work as a band named SANAM. And the fun news is, they have just released their latest one, Chala Jaata hoon, as a tribute to their recent trip to the beautiful valleys of Munnar.

The song is picturized in the beautiful Munnar with magnificent tea gardens and picturesque greens all around. The only prop they have used in the video, apart from the instruments, is a jeep, which provides the fun element in totality. Venky S, one of the band members, recently injured himself in an accident and got his leg bones fractured. In this video, however, he is seen having a good time and enjoying with his friends.

They have mentioned it in the video description on YouTube that this song is their tribute to the resort in which they have stayed while vacationing in Munnar. And quite true, as mentioned by them, meeting new people, creating new memories and experiencing a new culture is indeed very fascinating and can easily become an inspiration for any form of art. Unlike other romantic numbers done by SANAM, this one’s a quirky number which will instantly lift up your mood on a gloomy day! The way the boys have fun in the video will make you feel like taking a trip somewhere with your gang. The awesome natural beauty of Munnar has been shown perfectly in the video without even losing focus from the boys and the song, of course!

So, if you haven’t watched the video yet, you must go and watch it right away, because this video is something which will instantly bring a smile on your face if you are spending just another day in the office! You might even start imagining the signature style of Rajesh Khanna in the original video, sung magnificently by Kishore Kumar, from the movie Mere Jeevan Saathi. This is yet another #SANAMrendition which you will love, without a doubt!