HotFridayTalks
Home Music Brad Paisley And Jimmy Kimmel Welcome Immigrants To The US With Funny... 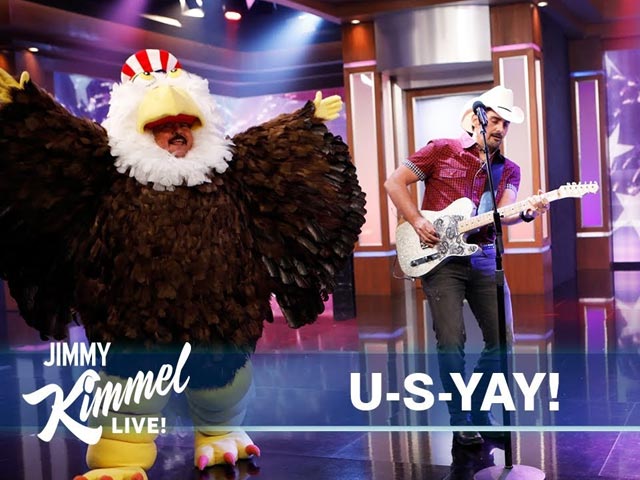 Becoming an American citizen used to be a happy affair just a few years back, but the recent discourse against immigrants in the country has added a lot of tension to these milestones. Jimmy Kimmel and Brad Paisley hence decide to ease this pressure a bit by welcoming a batch of new American citizens Jimmy’s show and singing a song for them.

These people came to the US as immigrants from places like Tunisia, Philippines, Pakistan and other countries, before finally being declared as US citizens recently. They were welcomed on the stage by the show’s presenters with WWE-style introductions, which is as American as things can get with when it comes to grand entries.

Before the Brad Paisley performance, Kimmel said to the audience, “This is a very strange time in a America. Our president is building walls and telling people to go back where they came from. With all that happening it’s important to remember that many people still dream of becoming Americans. Every week immigrants from all around the world take the oath of citizenship. These ceremonies are held in libraries and classrooms and courthouses, which is fine. But I think, becoming American should be more exciting than a trip to the DMV.”

After the introductions were over, Brad Paisley arrived on stage with a guitar, and belted out a funny country music song about what it means to be a citizen of the United States. The lyrics include such lines as, “You can exercise your freedom of speech. Eat a sticka’ butter at a county fair. Wear your Crocs will a pair of socks. Go to Target in your underwear.”

You can watch the entire segment of the Jimmy Kimmel Live episode in the video we’ve posted in the space above.

“Makhna” By Yo Yo Honey Singh – Are The Sexist Lyrics...