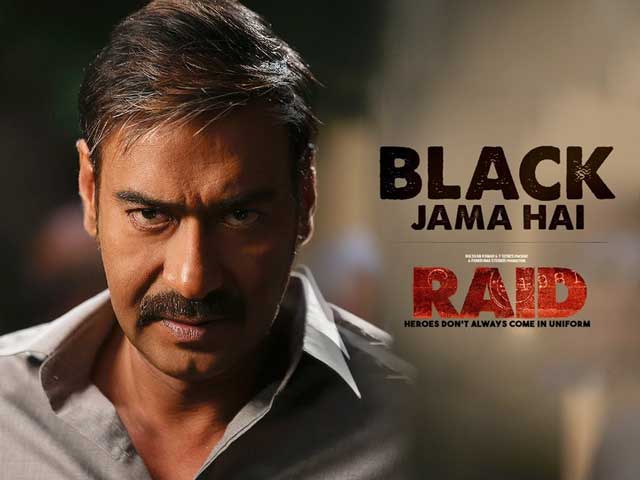 Black Jama Hai is the name of the newest song from upcoming film Raid. The Ajay Devgn and Ileana D’Cruz starrer is all about the hunt for black money, and the song very skilfully sets up this premise with its music and lyrics.

Also, the music video that’s out on YouTube right now, features some really exciting dialogue-baazi between Ajay Devgn and the film’s main villain, the ever so impressive, Saurabh Shukla.

Coming back to the song itself, Black Jama Hai has been composed by Amit Trivedi, with the lyrics having been penned by Indraneel. It takes the form of a marching song during its chorus, which is when it reaches its peak.

The rest of the parts don’t end up impressing much. Even the brilliant singing performance from Sukhwinder isn’t able to salvage something from it. That said, the song goes very well with the visuals, making it a great fit for the kind of atmosphere that the film is trying to create.

The music for Raid is being composed by Amit Trivedi and Tanishk Bagchi. The latter is responsible for Sanu Ek Pal Chain, the most popular among the four songs that have been released till now. Sung by Rahat Fateh Ali Khan, it of course borrows from the old song of the same name, originally composed by Nusrat Fateh Ali Khan.

There are too many similarities between this one and last year’s Mere Rashke Qamar. For one, both have been picturised on Ajay Devgn and Ileana D’Cruz. That’s not all, both the tracks have been recreated by Tanishk Bagchi and sung by Rahat Fateh Ali Khan.

Raid is being directed by Raj Kumar Gupta, who has previously given us hits like Aamir and No One Killed Jessica. The writing duties have been handled by Ritesh Shah, whose previous projects include Pink, among others. The film tells the story of an honest Income Tax officer who carries out a long-drawn raid at the mansion of the most powerful man in Lucknow.

Raid is slated to hit theatres on March 16.

The Cranberries Say Wake Me When It’s Over In Their New...