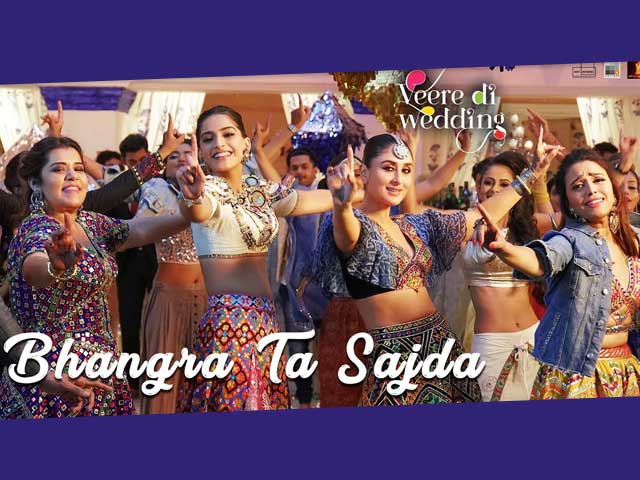 After getting us excited for Veere Di Wedding with its grand trailer, the makers of the film have released its latest song titled Bhangra Ta Sajda. An out and out dance number, this one has the movie’s entire lead cast shaking a leg to its fast paced Punjabi beats.

The song has been composed by Shashwat Sachdev who is still trying to establish a firm foothold in Bollywood. His debut album for the film Phillauri was well appreciated, with the song Sahiba going on to become a chartbuster. He later also composed the title track for Kaalakaandi, which makes Veere Di Wedding his third mainstream project.

Bhangra Ta Sajda is a song that’s high on energy from start to end. Its bhangra beats are accompanied by electronic music which resembles Nucleya’s compositions quite a bit. The song cannot be described as hummable, but it seems to be doing the job just fine as something that would make you want to dance.

The singing performances from Neha Kakkar, Romy and Surya Ragunaathan are on point. Composer Shashwat Sachdev has also lent his voice for this song in a portion. What will quickly grab your attention are this song’s funny lyrics. Lines like, “Maal Manali wala roll kiya hai, saala left chalun jab mudna ho right” will make you eager to listen to other stanzas.

Veere Di Wedding is slated to hit theatres on June 1.

Read Also: “Tareefan” From Veere Di Wedding Is A Groovy Party Anthem With A Twist

Diljit Dosanjh Dances It Out With Sunny Leone In ‘Crazy Habibi...