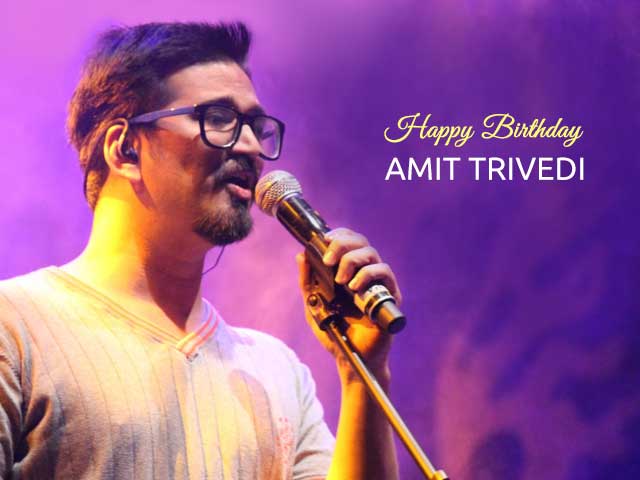 Amit Trivedi has shot into fame as a Bollywood music composer, singer, musician and lyricist for his amazing compositions. Hailing from Ahmedabad, Gujarat, he was inspired by electronic music and started composing music at nineteen years of age. Bollywood happened when singer Shilpa Rao recommended Trivedi’s name to movie director Anurag Kashyap. It is then that Trivedi composed music for the movie Dev D (2009). He went on to compose, write and sing for many other Bollywood movies after that, and has many national and international awards to his name.

On his birthday today, (8th April, 2018), as he turns 39, here are five of his songs that will remain remembered forever:

This song is one of liberation, assuring us that we are enough for ourselves. It tells you that you can definitely find on your way on your own, and don’t depend on others for your life choices. It is a perfect combination with the actual movie scene, where Kangana’s character finally realizes that she can be happy alone.

Here’s another romantic number sung by Javed Ali and Shreya Ghoshal. This song explores the dynamics of love, as the male lover requests his beloved to give him a chance to love her. Written in rustic Hindi against a soft background, the lyrics touch even the most unromantic person through its beautiful lyrics.

A song for those who could not follow their own dreams, you will love this song sung by K. Mohan. Udaan is greatly regarded as one of Trivedi’s most underrated works. This number inspires you to not fear, live life to the fullest and follow your heart no matter what. This is what you need to listen to when you feel sad and hopeless, for it will truly uplift your spirits through its hopeful lyrics speaking of freedom, new beginnings and background music.

One of the songs that led Trivedi to his fame, this peppy number with its unconventional music and quirky lyrics added the fun quotient to the movie. It spoke about the modern world, where everything is unpredictable and how one needs to be careful to avoid trouble, just like Abhay Deol’s character in the movie. This song was both composed and sung by Amit Trivedi himself.

This soulful creation sung by Kavita Seth speaks about a woman who’s falling in love with someone she had never expected to. The soothing lyrics and music totally brought out the romantic element in the happy-go-lucky movie. The lines speak of modern-day relationships, where people are often afraid to commit themselves.

Each of these songs are iconic on its own. Here’s wishing Amit Trivedi a very Happy Birthday!

Read Also: 7 Songs By Amit Trivedi Perfect For Your Playlist