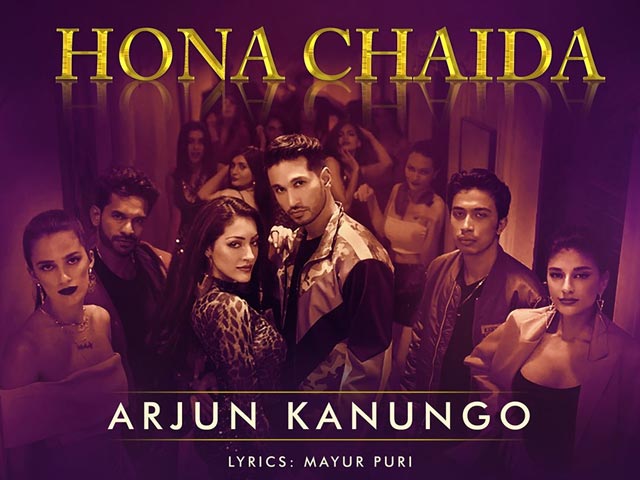 Arjun Kanungo has gone ahead and released a new track called ‘Hona Chaida,’ which unsurprisingly happens to be a party song. The artist has composed it along with Nisha Asnani and Leny Magoufakis, the latter among which has also produced the track. Mayur Puri and Kanungo himself have written the lyrics for this one. A music video for the track has also been launched by VYRLOriginals on its YouTube channel.

‘Hona Chaida’ lays a lot of focus on the bass. The beats are striking and catchy. Arjun comes in with his trademark falsetto-like singing style. The chorus is still sung in the head voice though. Overall, this is yet another brilliant vocal performance by the artist, who just keeps dishing out unique and catchy music time and again.

The Punjabi lyrics of the main song are complemented by cringy rap lyrics written by Arjun himself. They go, “Mere gaane ka remix, hona chaida. Har shaadi mein woh fixed, hona chaida. Mere video ki jo lead ho, ya ho Deepika, ya ho Aliya. Mujhpe toh biopic, hona chaida.” Everything that the song sets up before this, is killed immediately by this portion. But thankfully it ends early and the music takes over to cover the flaw.

The music video has been shot very well, with lots of camera tricks. Apart from Arjun Kanungo, it also stars Jeniffer Piccinato, Carla Dennis, Perrie Kap, Kunal Kucchal and Faraz S. It has been directed by Vishal Handa.

Arjun Kanungo recently featured in Pritam’s soundtrack for The Sky Is Pink, with the track ‘Nadaaniyaan,’ which he sang along with Lisa Mishra. His last single had come in June, in the form of ‘Woh Baarishein,’ a brilliant symphonic ballad with poignant lyrics. It was yet another highly impressive track from the singer-composer who has been having a great run since his debut.

You can watch the music video of ‘Hona Chaida’ in the space above.