HotFridayTalks
Home Music AR Rahman Stars In ‘For You My Love’ Music Video From Gurinder... 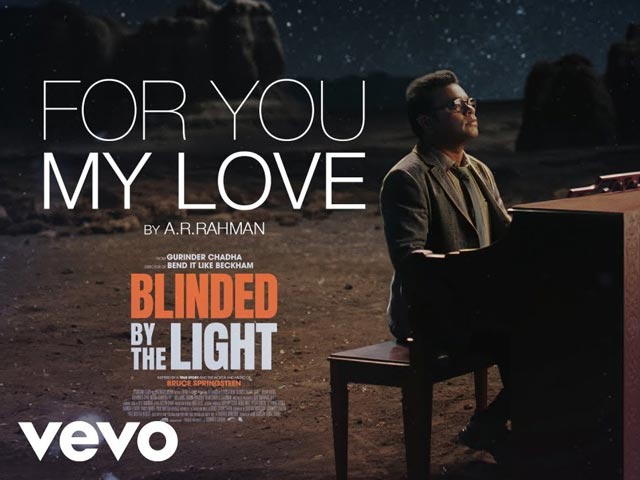 A new music video featuring AR Rahman has been launched by Columbia Records/Legacy Recordings for the song ‘For You My Love,’ which was featured in the film Blinded By Light, directed by Gurinder Chadha. The song is a English-Punjabi mash-up of sorts, and has been sung by Hriday Gattani and Parag Chhabra, with its lyrics having been penned by Shellee and Rianjali.

About his association with the film, AR Rahman had to say, “The timing of Blinded By The Light is so right. It’s a reminder to those who have forgotten the beauty of life, which is about giving, sharing, learning and empathy. I’m so honoured to be a part of this movie and the song which again reminds us that change is the only constant factor!”

The music video of ‘For You My Love’ has been directed by Amith Krishnan, who had previously worked with the Oscar-winning composer on ‘One Heart: The A.R. Rahman Concert Film.’ The video does feature footage from the film, but it has been complemented by shots of AR Rahman playing the piano, and other artists rendering their lyrics.

Speaking about the film’s association with Rahman, director Gurinder Chadha said, “It is always a pleasure to work my friend, A.R. Rahman. He has the amazing ability to go straight to the emotional heart of whatever composition is required by me or the film. ‘For You My Love’ is a wonderful blend of Western and Eastern sensibilities brought together by A.R. Rahman’s masterful magic.”

Blinded by the Light is a comedy-drama that revolves around the life of a 1987 teenager of Pakistani origin, who learns to live his life, understand his family and find his own voice through the music of American rock star Bruce Springsteen. It was released in the UK on August 9 and later in other territories, and was received with favourable reviews. To date, the film has grossed $10.9 million in the United States and Canada, and $4 million in other territories.