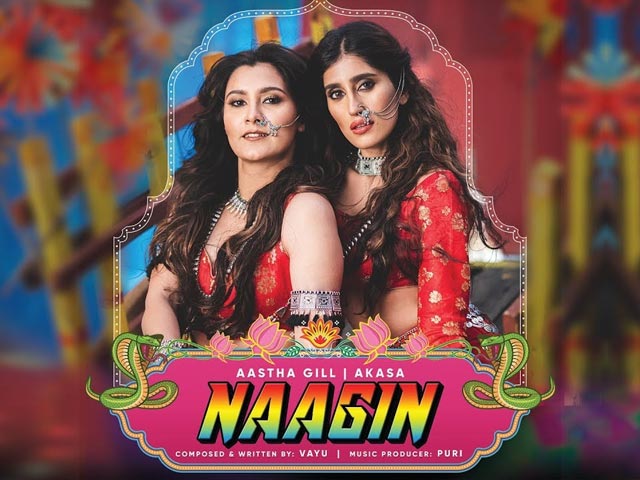 After teasing it for the last few days, Sony Music India has finally released ‘Naagin,’ a new song composed and written by Vayu and sung by Aastha Gill and Akasa Singh, with additional vocals from Puri, who has also produced the track. The song has also been blessed with a music video that features Aastha and Akasa doing a new interpretation of the famous naagin dance. The two have been working with Sony Music India since a very long time now, so it’s no surprise that they’ve decided to do a collab now.

The hook of the song goes, “It’s been long, teri been sune pardesi. Naagin din gin gin gin gin gin mar gayi.” As funny as that sounds, the composition is pretty slick. The song doesn’t take long to grow on you with its thumping beats and the impressive vocals by Aastha and Akasa. ‘Naagin’ maintains its high intensity from start to end, and it definitely makes you want to shake a leg to it.

The music video of ‘Naagin’ has been directed by Sneha Shetty Puri. About it, Aastha Gill had to say, “The idea for the video came from the premise that women shouldn’t feel threatened by intimidating, cool, powerful women, but befriend them instead.” Akasa added, ”It is often portrayed that artists in this industry can only be rivals because of the cut-throat competition. ‘Naagin’ proves that wrong by having two queens celebrate each other and have fun.”

‘Naagin’ is now available for streaming on all major streaming platforms. And you can watch its music video in the space above.

Meet Prabh Deep, The Delhi Rapper With A Clear Purpose