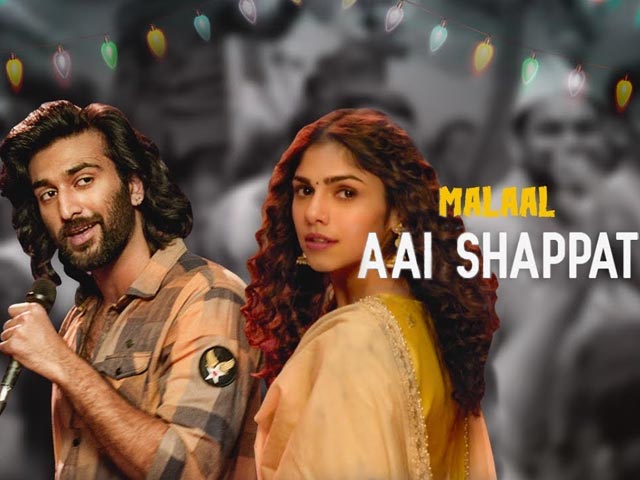 A new music video from the film Malaal has hit YouTube in the form of ‘Aai Shappat.’ This track has the film’s lead actor Meezaan Jaffery professing his love to the lead actress, Sharmin Segal. Given the character’s Marathi background, he uses the words ‘Aai Shappat,’ which mean mother’s promise, while conveying his feelings to her. Malaal is a contemporary love story set in a Mumbai chawl, and revolving around Astha and Shiva (played by debutants Sharmin Segal and Meezaan Jaffrey), who are from contrasting backgrounds.

The song takes place during Diwali celebrations in the chawl, and has Meezaan’s character going on stage and grabbing the mic. It begins with a poem of sorts, which goes, “Suno meri jaana, dil parwana. Chahe jal jaana, aag mein teri, tere ghar aa ke tujhe le jaana. Main hoon Majnu tu Laila meri.” These words make way for the chorus, which has the lines, “Aai shapath tujhyavar prem karto, meri jaana.” These translate to “I swear by my mother’s name that I love you.”

The track has been composed by Sanjay Leela Bhansali, who also happens to be one of the producers of this flick. It’s got a feel good vibe to it, but it’s pretty one dimensional in nature, unlike his other compositions, which happen to have so many layers. The lyrics by Prashant Ingole are well written, but who impresses the most is the singer, Rutvik Talashilkar. His voice is filled with maturity, and he even showcases quite a bit of vocal range in this track.

Malaal will be released on July 5. It is a remake of the 2004 Tamil film, 7G Rainbow Colony, which starred Ravi Krishna, Sonia Agarwal and Suman Setty. This new flick acts as a debut vehicle for Meezaan Jaffrey, who is Javed Jaffrey’s son, and Sharmin Segal, who is Sanjay Leela Bhansali’s niece.