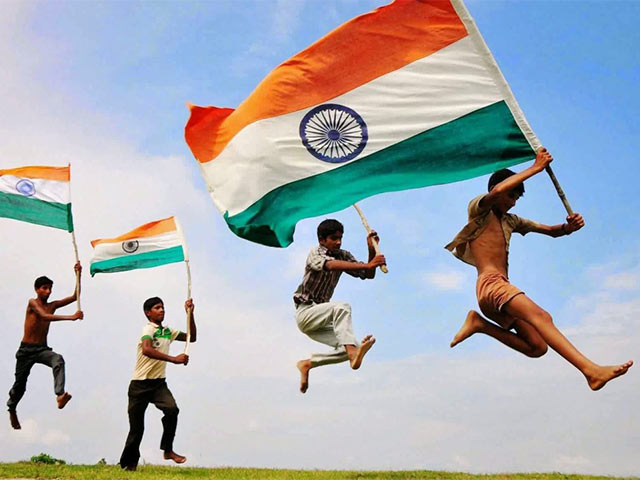 The Indian republic day is fast approaching. It’s a day on which festivities take over our towns, and there are smiles all around. Among all this, lots of people like to get together and celebrate the fact that our country is a republic. It is for or such gatherings that we have collected a few songs that will definitely appeal to the patriots in you.

This is no doubt one of AR Rahman’s best songs. It evokes a special kind of feeling that’s hard to describe. The lyrics to this one are extremely good moreover.

This one from the movie Lakshya talks about the importance of unity. It’s got an extremely pleasant tune and some really inspiring lyrics by Javed Akhtar.

From the hit Aamir Khan show, this song used to get everyone excited for the weekly episode of Satyamev Jayate. Composed by Ram Sampath, it has been penned by Prasoon Joshi.

Indian Ocean’s Des Mera is a brilliant satire on life in modern India. There are two versions of this song, with one of them being the band’s original number and the other one, their new version for the film Peepli Live.

Shah Rukh Khan’s 2007 hockey movie had some great music, and a highlight among all the songs was the title track Chak De India. It speaks about determination and courage, and is very inspiring for sportspersons.

Sung excellently by Udit Narayan, this song talks about the importance of national integration in the simplest of terms. Anyone who has watched the film Swades cannot forget this one.

One of the first songs created by Shankar, Ehsaan and Loy together, this one is a high-energy number that gets everyone pumped in no time. Every patriot will love this song.

One of the most iconic songs in India is Ae Mere Watan Ke Logon. It is sung by the nightingale herself, Lata Mangeshkar.

Sung by Daler Mehendi, this song gets you to do bhangra effortlessly. It features truly excellent music, which has been composed by none other than AR Rahman.

Here’s a softly sung number by Hariharan which will instantly appeal to the patriot in you. You will want to keep listening to it again and again.

This unforgettable 10-minute song from the film Border is an ode to our soldiers and their sacrifices. It’s an extremely emotional track, and has been sung by Sonu Nigam, along with Roop Kumar Rathod.

From the 1957 film Naya Daur, this track brilliantly captures the diversity of the Indian republic. It’s perfectly suited to be played on Republic Day.

With lines like “Desh mere, desh mere, meri jaan hai tu,” this one perfectly encapsulates the love for one’s country into a simple song.

This is another very old number, featuring Monoj Kumar at his trademark patriotic best. It’s a loving tribute to the land of India.

An excellently written track, Sarfaroshi Ki Tamanna will stir you up from within upon listening to it. It has been rendered beautifully by Sonu Nigam and Hariharan moreover.

This is a song we’ve been singing ever since we were kids. It brings a lot of nostalgic value with it, more than anything.

Shah Rukh Khan and Juhi Chawla’s Phir Bhi Dil Hai Hindustani was a big hit the year it came out. Naturally, its music too found fandom in the audience. This is one of the most memorable songs from the film.

This one’s a brilliant composition by the late Madan Mohan. It has a vintage vibe to it, and makes you feel proud of being an Indian.

This song from back in 1961 is a superb composition talking about having a progressive attitude in modern India. Its tune is quite catchy.

One more song from the movie Swades in this list, this track never fails to touch your heart. Its lyrics by Javed Akhtar and music by AR Rahman combine to offer an incredibly poignant experience.

From the film Karma, this track sung by Mohammed Aziz and Kavita Krishnamurthy will melt your heart. It’s a truly patriotic number talking about one’s love for their country.

Shahid Kapoor Has Sobered Up In This New Song From Kabir...