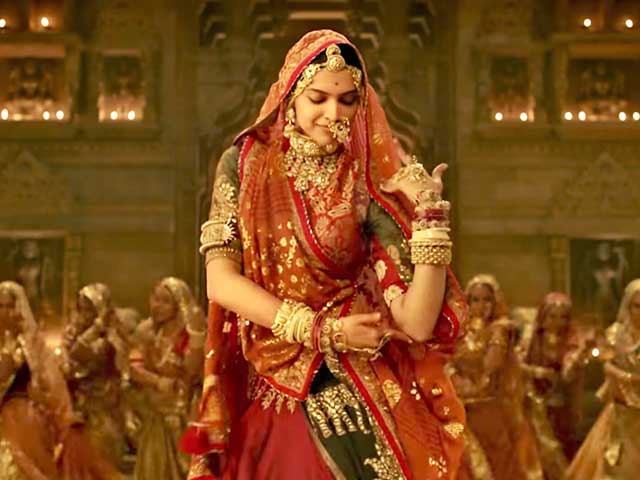 Folk as a genre is very conventional and contributes tremendously to the local, cultural music scene. World folk music perhaps originated from the fold revival of 20th century and stands in sharp contrast to the highly commercialized classical music. The genre and all it entails is largely related to the concept of national identity. In the recent past, a lot of folk songs have been featured in bollywood movies giving them an aesthetic appeal which is a great thing, especially at a time of “main tandoori murgi hoon yaar, gatkale saiyyan alcohol se.”

This song has truly revolutionized folk music in Bollywood, thanks to Sanjay Leela Bhansali for the composition and to A.M Turaz and Swaroop Khan for its legendary lyrics. Shreya Ghoshal has never gone wrong and she did perfect justice to the song this time too. The term originates from the Rajasthani folk dance “Ghoomar” known especially for its iconic twirls.

In fact, Deepika has undergone special training for shooting this song, during the course of which she had to do almost sixty six twirls wearing heavy intricate jewelry. The setting of the video replicates the interior of Chittorgarh fort. The color palette of this is highly commending in keeping with the typical Rajasthani folk scenario, switching between pale golden and light brown.

It is a recreation of a beautiful Rajasthani folk song Anjan ki seeti mein mharo man dole. Ikram Rajasthani tweaked the lyrics for the movie Khoobsurat, and it’s been beautifully rendered by Resmi Sateesh and Sunidhi Chauhan. Sneha Khanwalkar did the music for this funky and peppy item number.

This song sung by the versatile Papon, Smita Jain and Vidhi Mehta revives traditional Rajasthani folk and fuses it with modern music in variations that are only eargasmic. You will know what Rajasthani folk songs are really like once you listen to this one.

Nothing could have captured the flux of emotions that happen in Cocktail better than this brilliant Pakistani Punjabi folk song by Arif Lohar and Harshdeep Kaur although Meesha Shafi accompanied when it was originally performed for MTV coke studio.

This is a traditional Marathi folk song, the lyrics being too characteristic of the Maharashtrian culture. It is sung on the wedding to celebrate the nuptial of a bride and is an ode to the various aspects of her timeless beauty. Sung by Sunidhi Chauhan, this song in English Vinglish serves a very similar purpose.

Dadaria is one of the many kinds of folk songs from Chhattisgarh where men and women have been known to sing it during leisure while harvesting in paddy fields. This song by Rekha Bhardwaj from Delhi 6 is actually an adaptation from one of the Dadarias.

Originally, it’s a renowned folk song of the Thar desert and the earliest known version was sung by Allah Jilai Bai in the Durbar of Maharaja Ganga Singh ji who was subsequently awarded the Padam Shree. This song celebrates the glorious return of the Rajput warriors after they have fought vigorously for days at an end. This song has been beautifully incorporated into this movie and is sung by Karsan Sagathiya.

As the name of the movie suggests, this is a folk song from the valleys of Kashmir. It epitomizes folklore and fables. The original song is a part of the first ever Kashmiri opera Bombur ta Yemberzal (Bumblebee and Narcissus). It is a song of celebration and belongs to the joyous occasion of mehendi. When Shankar Mahadevan, Sunidhi Chauhan and Jaspinder Narula took it over, how could it ever go wrong?

We all remember Aishwariya Rai swirling to the beats of the song and looking beautiful. What we however didn’t know was, the song is a very famous Rajasthani folk song by the Manganiars who are obscure artists from various parts of the state coming together to create mesmerizing folk music. Karsan Sargathia and Kavita Krishnamurthy made this song their own, only adding a much needed Bollywood twist for Bhansali’s love ballad.

The folk songs speak of culture and traditions more than anything else. They spring from our ancient roots and can take us back to them. Bollywood has beautifully adapted them and we absolutely cannot complain.

Jassie Gill’s New Song Has Him Learning To Play A Guitar...