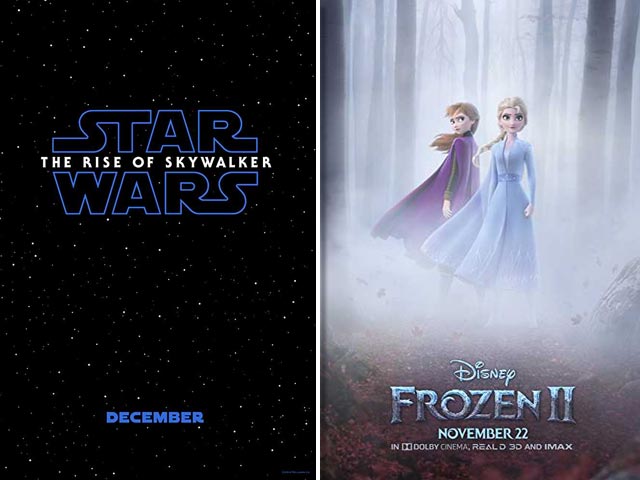 2019 has been an interesting year as far as the movies are concerned but there’s still a lot more to look forward to in the coming months this year. From spin offs to reboots and sequels we have it all. Take a look

Star Wars: The Rise Of Skywalker

AS reported by Variety, Joaquin Phoenix’s Joker will likely be screened at the Venice Film Festival this year. Joker, which is said to be a dark film, releases on 3 October this year and has Joaquin Phoenix playing the lead character, while actors like Jack Nicholson, Heath Ledger, and Jared Leto have played the part earlier.

While in the prequel Maleficent wanted to kill Aurora, from the trailer it seems this time looks like Maleficent loves Aurora too much! Maleficent: Mistress Of Evil continues from where the previous Maleficent ended. In this one Maleficent (Angelina Jolie) has Aurora (Elle Fanning) under her wing but is not happy with Aurora’s marriage to Prince Philip (Harris Dickinson). This film also features Michelle Pfeiffer as the Queen of the neighboring kingdom & Philip’s mother. The film is all set to release on 17 October.

Frozen 2 is another sequel from Disney. This one is a very popular and much loved movie which was loved by audiences and critics as well. It was also one of the highest-grossing animated films. Fans are eagery waiting for the sequel and expectations are high for this one. Frozen 2 releases in November this year.

Charlie’s Angels the reboot is a fresh take on the 2000 Charlie’s Angels. This one is said to be full of some girl power moments. While Naomi Scott plays Elena, a programmer who can’t sleep at night , Kristen Stewart plays Sabina, the one who runs the ground game, and Ella Balinska plays a badass. Directed by Elizabeth Banks, the film releases on 1 November.

Horror film, It: Chapter 2 has been adapted from Stephen King’s novel of the same name. The first in the series was released in 2017 and was a huge success at the box office. It: Chapter 2 is one of the most anticipated horror sequels and is all set to hit the theaters on 5 September

Jumanji: The Next Level

A sequel to the 2017 film, Jumanji: Welcome to the Jungle and the fourth installment of the Jumanji franchise, Jumanji: The Next Level stars Alex Wolff as Spencer who goes back into the game and now his friends, grandfather played by Danny DeVito, and grandfather’s friend played by Danny Glover, get sucked into the game to save him. Sounds interesting isn’t it? Jumanji: The Next Level releases on 13 December.