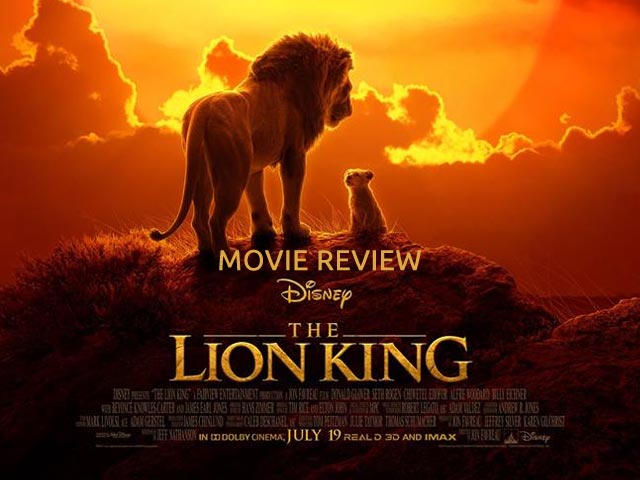 The Lion King is another live action from Disney, we’ve had Aladdin recently and Jungle Book, Cinderella, Beauty and The Beast, Pete’s Dragon and Dumbo. The visuals and technical achievement in The Lion King is praise worthy and a visually stunning success.

Most of us have watched the 1994 animated version of The Lion King and have some beautiful memories of it, what lacks in this rebooted version of The Lion King is that feeling, even though the visuals are incredible and the voice cast is brilliant. It’s difficult to believe that all that we see is not real but recreated digitally just like John Fraveaus’s Jungle Book. The artists who worked behind creating the look are worth mentioning, every little thing in the film from a blade of grass, to insects, and animals etc. look life like. What’s missing though is the emotions and expressions on the face of the animals in this recreation.

The new Lion King is a shot for shot remake of the 1994 Lion King. The film has nothing new, except for a new song that has been added, a few scenes and songs that have been shortened or removed. The famous song, “Can you feel the love tonight”, is featured in daylight in this new version of The Lion King, unlike the original where it was featured in a night scene and somehow the “tonight” word doesn’t fit in there!

Having said that, the voice cast in the new version is what I loved. The voice cast elevates the film. Beyonce as Nala, Donald Glover as Simba, Seth Rogan as Pumbaa, Billy Eichner as the hilarious Timon, John Oliver as Zazu, John Kani as Rafiki, James Earl Jones as Mufasa and Jd McCrary as little Simbaa did a fantastic job in bringing the characters to life. My favorite voices were obviously Jd McCrary as the small Simbaa, Seth as Pumbaa, especially his laughter and James Earl as Mufasa.

The story like the 1994 film is emotional and the characters are entertaining just like the original version. The bickering between Pumbaa and Timon is something we’ve watched before too, but it still manages to make you laugh in the new version. My favorite dialogue is when the three arrive at the barren wasteland and Timon tells Simba, “I like what you’ve done with the place, but a bit heavy on the carcass.”

While personally, I am still a huge fan of the original, the new version, which is the same movie, is not that bad a watch, if you want to watch something more realistic with realistic characters. I also enjoyed singing to Hakuna Matata along with Pumbaa, Timon and Simbaa ! Another scene I liked was the way the bunch of hair from Simbaa’s mane falls and travels all the way to Rafiki.

In short new The Lion King is all about the visuals.