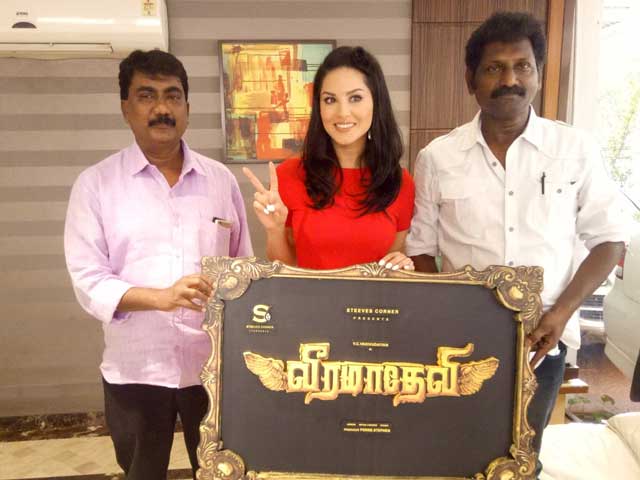 Sunny Leone will now make her Tamil debut as a heroine in Vadivudaiyan’s film, which has been titled Veeramadevi. The sensuous beauty took to Twitter to announce the same.

Hey folks… The wait is over…The title of my much awaited Tamil film is #Veeramadevi Historical magnum opus. I am so so excited :p @vcvadivudaiyan @DoneChannel1 #SunnyLeoneInsouth pic.twitter.com/7TCHS1h2vp

Veeramadevi was a popular warrior who lived in the south decades ago. Sunny, who has given the makers a call sheet for 150 days, is getting trained in martial arts, sword fighting and horse riding by a trainer from Mumbai in Andhra Pradesh. Some strenuous physical training, we must say!

The team will start shooting in January. For the subsequent schedules, they will be constructing grand sets.

Veeramadevi, which is said to have 70 minutes of CG work, will get released in five languages — Tamil, Telugu, Kannada, Malayalam and Hindi. It would be interesting to watch Sunny as she has never played a warrior before.

The makers have roped in technicians who worked on Baahubali and 2.0. Asked if the film will be like Baahubali, the director of the film said, “I don’t think it’s fair to even compare the two.”

Sunny said, “My character is extremely strong and I think if there is any representation of woman I would love to play would be her because she is a strong and independent woman. I am so excited and I can’t wait for everyone to see it. Reports say that this would change my image. But I don’t believe in it. I believe everything is a stepping stone towards something greater and more amazing. I love the way I am and I don’t want to change myself.”

Veeramadevi, produced by Ponse Stephen, has Navdeep playing the role of the antagonist.

Sunny Leone forayed into Tamil with an item song in Vadacurry and in Telugu with a dance number in Current Theega in 2014. She made a comeback in 2017 with PSV Garuda Vega. We can’t wait for this one as she will play a full-fledged role in this multilingual movie.

Have You Watched This Short Film Of YouTube Sensation Bhuvan Bam?