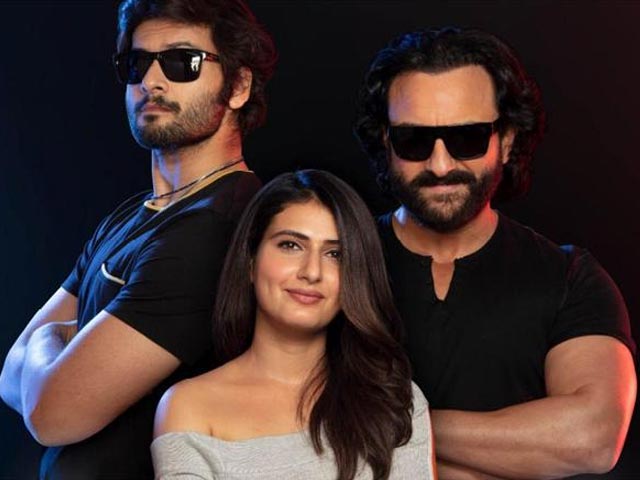 Yet another movie on the subject of a ‘Bhoot’ in the making! Looks like the super success of Stree has encouraged filmmakers to make more films on the horror comedy genre. The makers of the upcoming film Bhoot Police, have gone a step forward and are all set to give the audience a 3D horror comedy.

Actors Saif Ali Khan, Fatima Sana Shaikh and Ali Fazal will be starring in the 3D horror comedy Bhoot Police. The film will be going on floors in August this year. Even though the film is yet to go on floors, the first look poster of the film has been released.

The poster features all three actors; Fatima, Saif and Ali. While both Saif and Ali are seen standing all dressed in black and wearing sunglasses, Sana is sitting on a chair.This is the first time that Saif and Fatima will be seen sharing screen space.The film was earlier titled Tantrik and Abhishek Bachchan was supposed to initially play the role that Saif has been roped in to play.

Saif has earlier done Go Goa Gone in 2013, the film was a zombie comedy directed by Raj and D.K. The film also starred Saif’s brother – in – law, actor Kunal Khemu, Vir Das, Puja Gupta and Anand Tiwari. Saif is familiar with this genre since he has worked for Go Goa Gone, which was about three friends who decide to visit an isolated island for a rave party. The next morning they find themselves stranded, surrounded and hunted by flesh-eating zombies!

Ali too has been a part of a horror film earlier. He played one of the main leads in the romantic horror film, Khamoshiyan. The film was written by Vikram Bhatt and directed by debutant, Karan Darra and produced by Vishesh Films. For Dangal girl Sana, this will be the first time she will be experimenting with the horror genre.

The film is produced by Fox Star Studios, and the studio announced the film on Twitter on Monday saying, “Bhoots beware! #PavanKirpalani #SaifAliKhan @fattysanashaikh @alifazal9 are teaming up for #BhootPolice – a horror comedy in 3D! Shoot commences in August, 2019. Presented by Fox Star Studios.”

The release date of Bhoot Police is yet to be announced but looks like this is one fun ‘bhoot’ film to look forward to.