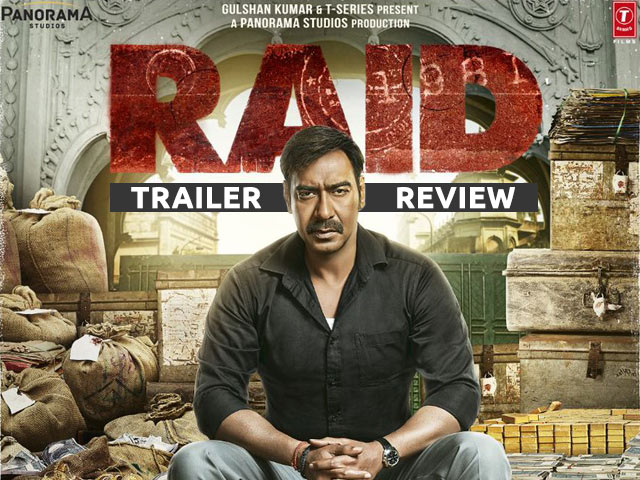 The trailer of Ajay Devgn’s forthcoming film, Raid was unveiled today by the makers of the film along with Ajay and Ileana D’Cruz. The film is a social drama set in the 80’s and tells the story of a a brave income tax officer in Lucknow, who fights corruption.

After his last release Golmaal Again which was a comedy, Ajay Devgn is back again doing some serious business as an honest income tax officer in Raid. The trailer looks gripping and hard hitting with some good meaningful dialogues. Ajay looks firm and fit as the honest government officer, who knows his business and is hell-bent on getting. Each time Ajay mouthed the power-packed dialogues, there was a lot of ‘seetis’ from Ajay’s fan club who were also invited to watch the trailer!

Speaking about the film, Ajay said, “While it all looks easy, the situation during the 80’s was not that easy. It was a tough time and people were actually killed and cut into pieces and thrown into the gutter during those raids.”

The director of Raid, Raj Kumar Gupta, who previously did Aamir and No One Killed Jessica also informs that this was one of the longest raids of that time and while we honor and publicie army officers and police officers, these honest and hardworking government officers like the income tax officers who also fight corruption are often unnoticed. “It was a dangerous raid and it is important to bring out the hard work that these officers do as most often, their work goes unnoticed,” he added.

The characters look very realistic in the film, Illeana has moved away from her glamorous look to a simpler, sari-clad homemaker and looked quite convincing. Saurabh Shukla as the wealthy villain looks his part and somehow one is reminded of his ‘kallu mama character from Satya clad in white dhoti and kurta from Satya.

While Illeana said she did not need a brief before the shoot started since the script was very well written and had clarity. To which Ajay joked and said, “ She didn’t need a brief, the only brief that was given to her was not to look too beautiful!”

In the film, Ajay character also hints at how women play an important role for our country to become successful. He is shown telling Illeana who plays his wife, that it is important for the wives of the country’s officials to be stronger than them. The film is scheduled for a March 16 release.

Read Also: Rakul Preet And Ajay Devgn To Come Together For A Rom-Com

Have You Seen The New Poster Of Wonder Woman 1984 Yet?